Ahead of Day-Night Test, Rahane posts picture sleeping with the pink ball; Kohli, Dhawan troll him

India’s Test vice-captain Ajinkya Rahane was light-heartedly trolled on social media by his captain Virat Kohli and batsman Shikhar Dhawan after he posted a picture on Monday night sleeping next to a pink ball.

The image was posted in context to the first-ever Day-Night Test in India, which will be played at Eden Gardens in Kolkata from November 22 between the hosts and Bangladesh. "Already dreaming about the historic pink ball test," Rahane wrote in the post along with the picture.

Both Kohli and Dhawan had their own take on Rahane’s post, While the Indian captain commented, "Nice pose jinksy," Dhawan wrote, "Sapney mein pic khich gayi." 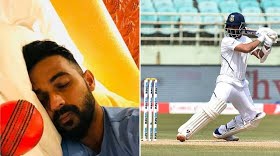 The Day-Night Test to be played at the Eden Gardens will be the first one for both India and Bangladesh. India is 1-0 up in the series having won the opening Test at Indore by an innings and 130 runs.

As per reports, the surface at Eden Gardens is expected to aid the fast bowlers. The match will be played from 1 pm to 8 pm in an endeavor to ensure dew has no role to play in the game.

India had an optional practice session under lights with the pink ball at Indore after the first Test ended well before the schedule. Test opener Mayank Agarwal had also revealed that National Cricket Academy head and former India captain Rahul Dravid had arranged three pink-ball sessions for them under lights.

Speaking after the Test win at Indore, Indian captain Kohli had stated, “The pink-ball Test is going to be exciting. It's going be a landmark event for Indian cricket and Indian Test cricket."

Bangladesh Prime Minister Sheikh Hasina and West Bengal Chief Minister Mamata Banerjee are expected to ring the Eden bell ahead of the Kolkata Test. A crowd of over 50,000 is likely to witness the first three days of the Test, Cricket Association of Bengal had earlier revealed in a tweet.