Following the manner in which the Indian batsmen were outdone by the South African pacers in the two one-dayers, there wasn’t much optimism as they headed into the first Test at Johannesburg on Wednesday.

Following the manner in which the Indian batsmen were outdone by the South African pacers in the two one-dayers, there wasn’t much optimism as they headed into the first Test at Johannesburg on Wednesday. In fact, there were others factors that pointed towards an Indian disaster. This was the first time in over two decades that India were fielding a batting line-up minus anyone of Tendulkar, Dravid, Ganguly and Laxman. In spite of their obvious talent, the inexperience of their batsmen was ought to bring their downfall. It almost was on the opening day, save for Virat Kohli. 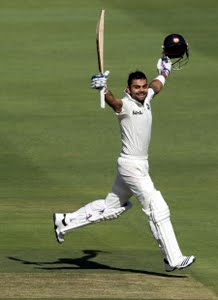 Like the other batsmen in the side, Kohli was also under the scanner since he had been undone a couple of times in the shorter version of the game. Also, in the run-up to the Test, a prominent ex-cricketer from South Africa predicted Kohli’s downfall, claiming that he did not have the technique to survive under the tough conditions. But, Kohli answered his critics in the best way possible. His century on the opening day of the Jo’burg Test was as good as Pravin Amre’s debut ton in 1992 at Durban and Rahul Dravid’s maiden century at this venue in 1997.

The most striking aspect of Kohli’s innings was the fact that he mixed caution with aggression brilliantly. Kohli walked in at a time when the Indian innings was in dire straits as the visitors had lost both their openers. As it often happens, the first day of a series sets the tone for the rest of the days. And, in this aspect, it was imperative for India not to get cowed down by the South African pacers. This is where Kohli was brilliant. He ensured, in the company of Cheteshwar Pujara, that India did not lose any more wickets to the new ball.

While Pujara held one end up, Kohli showed a lot of maturity especially considering the fact that he was playing his first Test in South Africa. What Kohli did exceptionally well during the innings was leave the ball outside off-stump. The one-hour period before lunch saw Kohli at his dogged best. He put his head down, and saw to it that he did not play any flourishing strokes, and lose his wicket in the interim. At the same time, he attacked the spinners to ensure that India did not get stuck up as far as the run rate was concerned.

In many ways, it was a perfect hundred by Kohli, one that he will cherish forever. But, there were a couple of blemishes he needs to work on. Kohli held himself up astutely having run-out Pujara, but it was a dismissal that shouldn’t have happened in the first place. Also, the build- up to his dismissal was rather predictable. Jacques Kallis distracted him with some smiling talk, and Kohli lost his concentration. In the past as well, Kohli has been undone by such tactics, so it will serve him better to shut out all such distractions. Take those mini-flaws away, and Kohli played a knock that made him and the team proud.