Watson’s form a worry ahead of fourth Ashes Test

Australia’s wonderful all-round performance in the Old Trafford Test has reignited the interest of fans in the Ashes. Following Australia’s poor showing in the first two Tests, thoughts emerged that this was going to be a disappointingly one-sided clash, with England walking away with the honours without having to drop a sweat.

Australia’s wonderful all-round performance in the Old Trafford Test has reignited the interest of fans in the Ashes. Following Australia’s poor showing in the first two Tests, thoughts emerged that this was going to be a disappointingly one-sided clash, with England walking away with the honours without having to drop a sweat. They may have retained the Ashes following the draw enforced by rain at Manchester, but Australia would now believe that they have a genuine chance of squaring the series 2-2. Hence, England can no longer take the Aussies lightly.

The biggest worry for Australia at the moment would be the lack of runs coming from the blade of Shane Watson. In each of the three Tests, the experienced all round has struggled to deliver with the bat. He was given the responsibility of opening considering his vast experience in international cricket. However, Watson hasn’t lived up to his billing, and his technique has been exposed against the swinging ball. His affinity to shuffle has got him in trouble, leading to him being trapped in front of the wicket many times. Watson is being retained for the upcoming Test considering his match-winning abilities, but it is time he delivers. 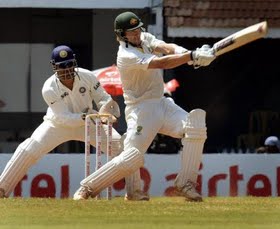 With David Warner being recalled to the squad, it wouldn’t be a bad idea to open with the left-hander and Chris Rogers while pushing Watson lower down in the order. Like, Watson, Warner’s technique is also susceptible, but he looked in reasonably good touch at Old Trafford. Also, he is a regular opener so that gives him a slight advantage over Watson when it comes to dealing with the new ball irrespective of the fact that both of them like to go after the bowling. Perhaps, Watson can be better utilised down the order, when the ball does not do as much.

The number three position is also a bone of contention for the Australians. Usman Khawaja hasn’t done a lot to inspire confidence in the team camp. But, at the same time, the think tank seems to have lost faith in Ed Cowan, who was demoted from opener to number three at Nottingham before being eventually dropped for the Lord’s Test. Australia would be skeptical to replace their combination with worked so well at Manchester. Still, if indeed they retain Khawaja, they would expect a lot better from him. Whether he delivers is another matter.

Another possible option could be bringing back Phil Hughes in place of Khwaja. Hughes played a wonderfully sublime knock in the opening Test, but it was lost against the backdrop of Ashton Agar’s sensational batting debut at number 11. Although, he had a bad game at Lord’s, it would be fair to say that his sacking was slightly on the harsher side. If he fits into their scheme of things, Hughes definitely deserves another run in the playing eleven. There’s lots to play for at Chester-le-Street if you are from Australia. First and foremost thus, they would like to get their combination absolutely spot on.