MI Vs RR: Mumbai were pathetic with the bat

For a team which consists of big names like Sachin Tendukar, Ricky Ponting, Dinesh Karthik, Rohit Sharma and Kieron Pollard, underperformances with the bat should be an exception. But, this it has been a norm for the Mumbai Indians.

For a team which consists of big names like Sachin Tendukar, Ricky Ponting, Dinesh Karthik, Rohit Sharma and Kieron Pollard, underperformances with the bat should be an exception. But, this it has been a norm for the Mumbai Indians. Their batting failure hit a new low against the Rajasthan Royals on Wednesday at the Jaipur. The continued failure of Tendulkar and Ponting at the top of the order proved costly for them, more so in this game, since they were chasing a highly competitive target set by the Royals. The time has come for Mumbai to try a new combination at the top of the innings.

In the last couple of encounters, Mumbai were rescued thanks to some sterling batting performances by Karthik and Sharma. However, there was bound to come a time when both would fall cheaply. Although Karthik’s 30 cannot be considered as a failure in a T20 game, considering his exceptional run and the poor scores being registered by the other big guns, his wicket has been the key for opponents. Thus, his dismissal against the Royals turned out to be the clincher for the Royals. And with Sharma also falling for a low score, there was no way back for Mumbai.

Just like the top and middle order, the lower order batting has also been a problem area for Mumbai this season. Barring the one blazing half-century, Pollard has done precious little for the side with the bat. Considering his experience and expertise in this format, he needs to be doing a lot more. He had a great chance to come up with a match-winning knock against the Royals, but played a poor shot to give it away. Ambati Rayudu is another man who needs to pull up his socks. He has been getting starts, but isn’t going further. May be he could be tried up the order, where he gets a chance to build his innings. 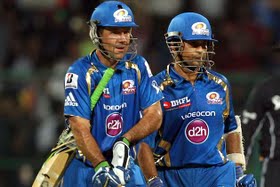 Speaking of building an innings, it is exactly what Ajinkya Rahane did for the Royals earlier in the day. After Rahul Dravid made the sensible move by demoting himself down the order so that the run-rate isn’t affected in the early overs, Rahane and Shane Watson got the side off to a much-needed flyer. The impetus that Watson provided to the innings was exactly what was missing in the Royals’ batting effort in the earlier games, even as Dravid and Rahane were steady at the top of the order.

Even after Watson fell after a breezy cameo, Rahane carried on batting till the very end, which allowed the batsmen at the other end a free hand. Dishyant Yagnik and Brad Hodge, both utilised the opportunity to the fullest, even as Rahane himself played some elegant strokes during the course of his innings. While Mumbai struggled with the bat, bowlers from the Royals played their part by chipping in with a well-rounded effort. Except Ankeet Chavan, all the other bowlers were among the wickets, and were economical as well. In short, the Royals were superior to Mumbai in all aspects.

Turning point of the game: Mumbai losing 4 for 31 inside the first eight overs itself.