Two of Indian cricket’s biggest superstars, MS Dhoni and Virat Kohli, will come face to face when Royal Challengers Bangalore take on Chennai Super Kings in the evening game of Saturday at Dubai.

Chennai succumbed to a 10-run loss from a position of dominance against KKR. The focus is firmly on veteran all-rounder Kedar Jadhav, who has failed to get going, and got completely stuck in the chase against KKR to hurt his team’s chances in a big way. In case, CSK decide to make a change, Ruturaj Gaikwad could be recalled or N Jagadeesan could come in.

CSK have been lucky in the batting department with Faf du Plessis in exceedingly good form, and Shane Watson having found his touch of late. However, Ambati Rayudu has been inconsistent while MS Dhoni’s batting woes have hurt CSK. In the bowling, the return of Dwayne Bravo and addition of skipper Karn Sharma had an immediate impact in the last game. 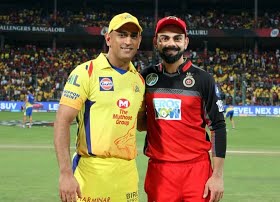 RCB have had their problems as well. Skipper Virat Kohli has played only one innings of note in the tournament so far and so has opener Aaron Finch, of whom much was expected. However, AB de Villiers and Devdutt Padikkal have ensured that RCB have got the runs on the board. Shivam Dube has played a few nice cameos as well.

Yuzvendra Chahal has kept the bowling flag flying high for RCB with a couple of game-changing performances. The other spinner, Washington Sundar, has also kept things tight. The pacers though have been too expensive with Umesh Yadav, Mohammed Siraj and and Isuru Udana failing to control the flow of runs, Navdeep Saini has impressed in phases.

Head-to-Head Record: Chennai have a 15-8 win-loss advantage over RCB in 24 matches. One game produced no result.

The Dubai surface has aided batsmen while the pacers too have found movement with the new ball. Spinners come into play as the game progresses.

The temperature will in the mid-30s, and humidity at 45 per cent.