The hero of India's 2007 World T20 and 2011 World Cup wins, Yuvraj Singh, is contemplating retirement from international cricket as he seems to have accepted the fact that his India career is over. As per reports, Yuvraj is keen to pursue a career in foreign T20 leagues and ply his trade as a freelance cricketer

As per reports, Yuvraj would make a decision after consulting BCCI over the issue. It may be noted that Irfan Pathan had to recently withdraw his name from the draft of Caribbean Premier League as he is still playing first-class cricket.

"Yuvraj is thinking of calling it quits from international and first-class cricket. He would like to speak to the BCCI and get more clarity on plying his trade in tournaments like GT20, Euro T20 Slam in Ireland and Holland as he has offers," a BCCI source was quoted as saying in a PTI report. 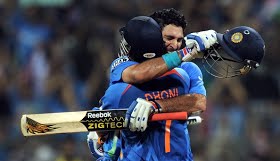 As for Irfan's case, a BCCI source further told PTI, "Irfan was told to withdraw his name from the draft. As far as Yuvraj is concerned, we need to check the rules. Even if he retires from first-class cricket, he will still be an active T20 player registered under BCCI. The rule needs to be checked."

Yuvraj hasn't played much for India of late, and his exclusion from the World Cup squad is a clear indication that his international career is over. Yuvraj made a confident start for Mumbai Indians in the IPL but was dropped very early from the playing eleven after a few failures.

There is still confusion over retired individuals and how they can take part in T20s leagues around the world other than BCCI's own IPL.