Following their shock loss in Abu Dhabi, a series win had gone out of the window for the Proteas. However, they still had a lot to play for in Dubai.

Following their shock loss in Abu Dhabi, a series win had gone out of the window for the Proteas. However, they still had a lot to play for in Dubai. South Africa are presently the number one Test side in the world, and they had a record to preserve, that of not having lost a Test series away from home since 2006, when they went down in Sri Lanka. And, just like great sides do, South Africa recovered brilliantly from the first Test loss, and but for ball tampering and Pakistan’s second innings defiance it was a flawless effort. 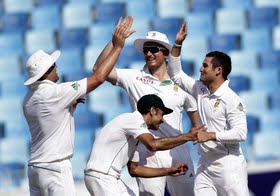 It is often said that the first innings of a Test match sets the tone of the game. This adage came to light again at Dubai. Pakistan had won the toss and decided to bat first. Obviously, their intention would have been to put up a challenging first innings total on the board. However, intentions do not translate into runs. After the high of Abu Dhabi, they were back to their floundering ways, and once they capitulated to a two- figure score the match was all but out of their grasp. And that is exactly how it turned out to be.

Although South Africa bowled well on the opening day, this was not Durban or Perth for them to surrender for such a low score. The fact that they lost five wickets to spinner Imran Tahir is an illustration of the loose cricket they played, considering their great reputation against spin. Dale Steyn was expected to cause trouble, and he did. But, with all due respect to Tahir, he hasn’t looked as someone who can run through opponents. This was amply evident in the second innings when Pakistan’s batsmen showed greater resolve. However, irreparable damage had been done by then.

The only way Pakistan could hope of winning the series was if their bowlers came up with an equally brilliant performance. It wasn’t to be though. South Africa aren’t a team that are going to let such opportunities slip. Also, there was no pressure on the so-called visitors after Pakistan were bundled out on the opening day. Graeme Smith ensured Hashim Amla’s absence wasn’t felt with a marathon innings that completely shut the Pakistanis out of the game. His massive partnership with AB de Villiers ensured that South Africa had the cushion of a mighty lead.

The result was a foregone conclusion once Pakistan’s top order collapsed for the second time in the Test, Khurram Manzoor registering a pair. Misbah-Ul-Haq though once again came up with a defiant innings to keep South Africa at bay for longer than they would have expected. People would have been shocked to see Misbah throw his wicket away with a hundred in the offing, but it only proved that he is also human. For too long he has single-handedly carried Pakistan’s hopes on his shoulder. The only other positive for Pakistan from the match was Asad Shafiq’s composed hundred. All it did though was delay the inevitable.

In the end, Pakistan’s first innings collapse came back to haunt them.