India's Very Very Special former batsman VVS Laxman turned 42 on Tuesday. While Laxman did not enjoy great success in ODIs, he was one of India's greatest match-winners in Tests. On his birthday, we take a look at five of his most memorable Test knocks. 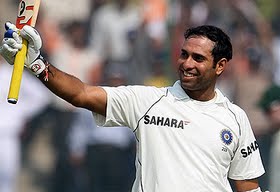 281 vs Australia at Kolkata in 2001: Without doubt, this was not only Laxman's best knock, but perhaps the greatest ever by an Indian in Tests. India were facing a huge deficit of 274 after crumbling in the first innings. Steve Waugh had no hesitation in asking India to bat again. The Aussies had India in trouble yet again. But, the Indian think-tank promoted Laxman to number three, and that made a massive difference. Laxman and Rahul Dravid joined hands to turned the game on its head. They batted out one whole day, and ended up with 281 and 180 respectively. Harbhajan Singh then spun his magic, and bowled India to victory.

148 vs Australia at Adelaide in 2003/4: If Eden Gardens was Laxman's Test, the Adelaide win had Dravid's stamp all over. But the victory could not have been possible without Laxman's contribution. His attacking 148 was a perfect symphony to Dravid laborious 233. Together, they added 303 and all but nullified Australia's massive first-innings total of 556, build around Ricky Ponting's stunning double hundred. Like fire and ice, Dravid and Laxman combined to destroy the Aussies. Ajit Agarkar then claimed six wickets to pave the way for a rare Indian overseas win.

96 vs South Africa at Durban in 2010: This was a match in which Laxman showed his true class as a batsman. On a pitch where a number of class batsmen struggled, and there were many of those across the teams, Laxman stood out with his second-innings 96, which put India in a position of strength after both the teams had failed in their respective first innings. Laxman's exquisite innings saw India set a challenging target of 303 for the South Africans. Sreesanth and Zaheer Khan ran through the South African batting with three wickets each as the Proteas lost by 87 runs.

73 not out vs Australia at Mohali in 2010: Yet again, it was Australia the opponent, and yet again, it was Laxman who made the difference. Battling a back injury, VVS was forced to bat lower down the order. India were chasing only 216 to win the Test, but crumbled under pressure to 124 for 8. But, Laxman did not give up. He battled the opposition as well as fitness to take India to a thrilling one-wicket victory. Laxman found able support in Ishant Sharma, but the latter was lbw just before the target could be crossed. Pragyan Ojha and Laxman then delivered the win in somewhat maddening circumstances.

167 vs Australia at Sydney in 2000: This was the innings with which Laxman announced himself to the world. The match was a lost cause as a struggling India were facing a first-innings deficit of over 400. But, with nothing to lose, Laxman, then batting as an opener, came out all guns blazing. He was hit on the helmet early in the innings by Glenn McGrath, but that did not deter him from taking on the Aussie fast bowlers. Even as India were humiliated 3-0, Laxman redeemed himself with 167 out of a total of 261. A year later, at Eden Gardens, Australia were to discover the knock was no fluke.