New Zealand Cricket has announced a 14-man squad for the Second Test of The National Bank Series against South Africa. Fast bowler Tim Southee who went wicketless in the drawn First Test at Dunedin has been dropped. Mark Gillespie, the 32-year-old seamer gets a recall into the New Zealand team after a gap of three years.

Commenting on the team selection, New Zealand Cricket National Selection Manager Kim Littlejohn said: “We have selected a similar Test squad to the one which has played well all summer.

“Tim Southee hasn’t been included. He a talented young fast bowler and we are confident he will return to the Plunket Shield and continue to put pressure on those in the Test team. 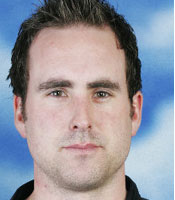 “We are pleased to be able to offer Tarun an opportunity. He is bowling well and offers a point of difference to the attack.

“BJ Watling and Dean Brownlie were not considered for selection as they have not recovered sufficiently from injury.”

The second Test match will begin on the 15th of this month at the Seddon Park in Hamilton. New Zealand are likely to give Test Debut to leg-spinner Tarun Nethula who could replace Tim Southee.