A South Africa vs Sri Lanka World Cup clash brings back memories of the bizarre 2003 game in which a D/L confusion led to the former being knocked out.

A South Africa vs Sri Lanka World Cup clash brings back memories of the bizarre 2003 game in which a D/L confusion led to the former being knocked out. Things are quite different this time around though as the Proteas have no chance of qualifying while Sri Lanka's qualification chances are hanging by a thread.

The 35th match of the 2019 World Cup will be played at Chester-le-Street and while South Africa have nothing to lose, Sri Lanka must be wary not to slip. They go into the contest high on confidence having brought down hosts England, who began the tournament as firm favorites, down to earth. Lasith Malinga has been the key for Sri Lanka in both their big wins. Against England as well, he proved that he has still some fight left in him. 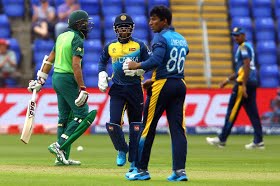 That said, Sri Lanka really needs to spruce up their batting. Angelo Mathews has finally come good with the bat. However, the department remains a big worry. The likes of Kusal Perera, Kusal Mendis, and Avishka Fernando need to score big and not just 40s and 50s. For Sri Lanka to qualify they need to keep improving. Pakistan's win over New Zealand has made things tense while England will be raring to fight back even as a hungry Bangladesh stay in contention.

South Africa have nothing to lose but that is perhaps also what would make them extra dangerous. The likes of Quinton de Kock, Aiden Markram, Hashim Amla and skipper Faf du Plessis himself should look to open up and bat with freedom for a change. du Plessis admitted that they are highly embarrassed with their showing in this World Cup and while it is too late to make amends, they can save some face.

The South African skipper raked up a controversy of sorts when he stated that he had tried stopping Kagiso Rabada from going to the IPL. The young pacer will be keen to put a performance worthy of his talent following a disappointing campaign so far. Chris Morris has been highly impressed with the ball, giving it all he has and standing up for the team's cause.