An unbeaten 79 by Cheteshwar Pujara and his unbeaten 93-run stand for the fifth wicket with Ajinkya Rahane (40 not out) aided India as they squeezed out an important lead of 126 by stumps on day three of the second Test at the Chinnaswamy Stadium in Bengaluru, on Monday. 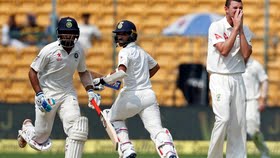 India ended the day on a decent 213 for 4, and will hope to build a lead in the region of 250, so as to put Australia under pressure in the fourth innings. Pujara and Rahane's impressive partnership gave India the edge by end of day, but the performance of opener Lokesh Rahul on the day was equally crucial. The home boy followed up his brilliant 90 in the first -innings with a much-more fluent 51 in the second, to begin India's fightback.

The fifth-wicket stand allowed India to overcome a harmful triple strikes by Josh Hazelwood, which included the big scalp of Indian skipper Virat Kohli. The India captain registered his fourth consecutive failure of the series when he was lbw to Hazlewood for 15. Kohli again reviewed the decision, but to no avail as inconclusive evidence meant the decision went in Australia's favour.

Kohli's dismissal was followed soon after by that of Ravindra Jadeja's. The latter was promoted up the order, ahead of Rahane, but couldn't survive a probing spell by Hazlewood. The bowler and earlier handed comeback man Abhinav Mukund his second failure of the Test.

India went into tea, wobbling at 122 for 4. They had already conceded a vital first-innings lead of 87, which could have been in three figures had it not been for Jadeja's six-for. Another defeat seemed imminent for the hosts. But, Pujara and Rahane with some luck and pluck turned the tide. They now need to finish off the task they have begun.