Having taken down Sunrisers Hyderabad via the Super Over route, Kolkata Knight Riders will now face a confident Royal Challengers Bangalore in match number 39 of IPL 2020 at Abu Dhabi. The inclusion of Kiwi pacer Lockie Ferguson made a massive difference to KKR’s fortunes as his figures of 3 for 15 stunned SRH. He was unplayable again in the Super Over, cleaning up David Warner and Abdul Samad.

RCB, on the other hand, go in having kept Rajasthan Royals at bay by seven wickets. Chasing 178, the game seemed to have slipped out of Bangalore’s grasp. However, RCB’s miracle man AB de Villiers once again came to the team’s rescue with three consecutive sixes off Jaydev Unadkat. While RCB will be pleased with de Villiers’ form, they cannot expect him to pull the team out of trouble on every occasion.

While RCB are currently placed third in the points table, KKR are just behind them at number four. De Villiers apart, it will be important for the likes of Devdutt Padikkal and Aaron Finch to give RCB a good start. Skipper Virat Kohli has remained among the runs, but he hasn’t been as fluent, so he will be keen to play a dominant innings. 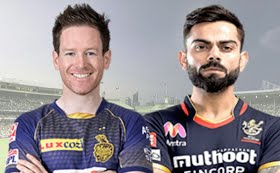 In the bowling department, pacer Chris Morris and spinner Yuzvendra Chahal have been doing an exceptional job. However, left-armer Isuru Udana has proved to be too expensive while Navdeep Saini has gone off the boil after an impressive start. Washington Sundar too needs to rediscover his touch.

As for KKR, they would be on the moon following Ferguson’s sensational spell against SRH, but Pat Cummins’ three wickets from nine matches will remain a massive worry. More will be expected out of the likes of Shivam Mavi and left-arm spinner Kuldeep Yadav. It also remains to be seen what KKR do with Sunil Narine, whose bowling action has been cleared.

KKR have a few issues to deal with in the batting as well. Shubman Gill is getting runs, but not at the pace that the team would want him to. Rahul Tripathi and Nitish Rana need to start converting starts while Andre Russell just not has been able to get among the runs, and is also nursing an injury. New KKR skipper Eoin Morgan has been highly impressive with the bat.

Head-to-Head Record: KKR lead RCB 15-11 in the head-to-head record. RCB though won the earlier contest between the teams this season.

Abu Dhabi surface has something for everyone. Batsmen can score runs once they get their eye in, and both pacers and spinners have made an impact. 170 is a competitive score.

At the start of the game, the weather will be in the early 30s. It will cool down as the match progresses