India Women beat Pakistan Women by 17 runs to win the Asia Cup Trophy for the sixth time in as many editions at Bangkok on Sunday. In the final played at the Asian Institute of Technology Ground, India won the toss and batted first. Mithali Raj led the way for India with the bat scoring an unbeaten 73, opening the innings, as they posted 121. In reply, Pakistan managed only 104 for 6 in their quota of 20 overs. Ekta Bisht was the most successful bowler for India with 2 for 22. 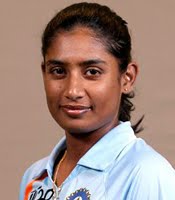 After India won the toss and batted first, Raj took on the Pakistani bowling, smashing an unbeaten 73 from 65 balls. Raj hit seven fours and a six during her knock which lasted 84 minutes, while her runs came at a strike rate of 112.30. Raj was the dominant partner in most of the partnerships she featured in. She and her opening partner Smriti Mandhana added 24 for the first wicket, in which the latter contributed 6. Next, Raj was joined by Sabbhineni Meghana in a 44-run stand for the second wicket. Meghana’s contribution for 9.

Pakistan fought back following Meghana’s dismissal, sending back Veda Krishnamurthy for 2 and India captain Harmanpreet Kaur for 5. At 89 for 4, India were in a spot of bother. But, Jhulan Goswami came in and smashed 17 from 10 balls, with the aid of two sixes, to help India finish with a competitive total. For Pakistan, left-arm spinner Anam Amin was the best bowler with 2 for 24 while Sana Mir and Sadia Yousuf picked up a wicket each while giving away only 23 and 15 runs respectively.

In response, Pakistan began positively as openers Ayesha Zafar and Javeria Khan added 24 for the first wicket. Goswami have India the crucial break when she bowled Zafar for 15 from 14. Asmavia Iqbal was then dismissed in the same fashion, for 1 by Shikha Pandey. Javeria Khan and skipper Bismah Maroof then added 28 for the third wicket, but neither could carry on. Left-arm spinner Ekta Bisht sent back Javeria for 22, as Pakistan slumped to 56 for 3. Nain Abidi and Iram Javed both were stumped as Pakistan further crumbled to 81 for 6. Nida Dar and Sana Mir both were unbeaten on 12 each as Pakistan finished on 104 for 6. Bisht was India’s most successful bowler with 2 for 22 while Anuja Patil, Goswami, Pandey and Preeti Bose a claimed one wicket each as India cruised to victory.