The Pakistan cricket team just never ceases to amaze, their batting in particular. Everyone is aware of their legendary fondness to collapse from absolutely comfortable positions.

The Pakistan cricket team just never ceases to amaze, their batting in particular. Everyone is aware of their legendary fondness to collapse from absolutely comfortable positions, but even the eternal pessimist would have bet against the Pakistanis losing to South Africa on Wednesday during the first ODI at Sharjah. After all, what did Pakistan require to win -- 19 runs with all of six wickets in hand when the incredible collapse began, which led to the batting side lose the match by an excruciating margin of a run. 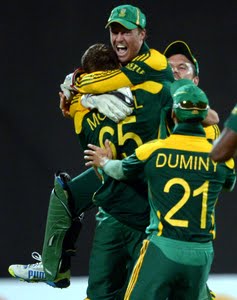 True, the pitch was turning and the ball was keeping low. But, it wasn’t an unplayable surface by any means. Also, of the two teams, Pakistan are more used to the conditions on offer. Even if one considers the fact that the South African bowlers were on top of the game in the last few overs, it cannot be denied that Pakistan lost the match because of some atrocious batting. With some better shot selection and some calm nerves out in the middle, they could have got home. Instead, they panicked unnecessarily, and to such an extent that the match slipped out of their grasp within a matter of deliveries.

So, what was the turning point of the match? Was it the wicket of Umar Amin that began the six-wicket slide, or the dismissal of Umar Akmal soon after, which set panic in the Pakistan camp? Well, one could look back at those two dismissals as well as the one after that, when Sohail Tanvir gave his wicket away without contributing much. But, a deeper analysis would point to the fact that Pakistan were favourites as long as Shahid Afridi was at the crease. And, it was indeed his wicket that firmly swung the game in the bowling side’s favour.

Afridi was at the crease when Pakistan needed only eight to win and had three wickets in hand. On paper, they were clear favourites even after the collapse. All Pakistan needed was for Afridi to bat sensibly. That said, it is not something we expect from ‘Boom Boom Afridi’ even though he has been part of the Pakistan side for close to two decades. Any other batsman with that kind of experience would have guided his side to a win with ease. With seven overs left, Afridi could have easily done the same, but he chose to be rash and lost the wicket. Pakistan could still have won, but they were in total panic mode, and just couldn’t cross the finish line.

In hindsight, the fighting half-century by Wayne Parnell was of extreme importance. At one stage, South Africa were struggling at 86 for 6, and had Parnell not stood up to the challenge, Pakistan would not have been chasing the target they eventually did. The contributions made by David Miller and Lonwabo Tsotsobe were equally crucial. Had they not supported Parnell in two dogged stands, things would have been drastically different. Thanks to the trio, South Africa stayed in the game, and eventually won it, courtesy Pakistan’s senseless batting.