Eoin Morgan on England's resurgence: Our exceptional days are better than we could have imagined

England captain Eoin Morgan has stated that the team has done everything they could to get themselves in the best shape for the World Cup. Morgan was speaking at the launch of the team's new kit.

The Englishmen were dumped out of the 2015 World Cup in the very first round after a disappointing loss to Bangladesh. However, under Eoin Morgan, they have engineered a stunning revival over the last four years, so much so that they go into the 2019 edition as the tournament favorites and the number one ODI team in the world.

"We're positioned in the best possible place at the moment," Morgan was quoted as saying in an AFP report during the launch event of the kit unveiling. "Our exceptional days are better than we could have imagined — the world records, etc — I could never have seen those at the start of 2015. That expectation has shifted with a level of performance," admitted Morgan, whose England have twice beaten the record for the highest ODI total of late. 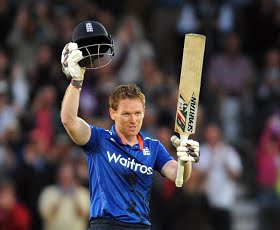 Morgan added in the AFP report that the World Cup is a huge opportunity for them to express themselves and continue to play as they have been doing in the last four years.

"We want to inspire the next generation of cricketers to come into the game and pick up a ball and a bat, hopefully, come out of the tournament worshipping one of the guys in our team," the Ireland-born Morgan further stated.

England goes into the World Cup on a real high having thrashed Pakistan 4-0 at home despite the latter coming up with some very impressive batting performances themselves.

They will kick-off their World Cup campaign with the first match against South Africa at The Oval on May 30, also the opening match of the showpiece event.