When Alastair Cook entered the Test scene in 2006, he started with a bang, scoring a fifty and a hundred on debut. It was a wonderful start, yet not many believed the left-hander had it in him to progress too far since he was seen as nothing more than a nudge and push player.

When Alastair Cook entered the Test scene in 2006, he started with a bang, scoring a fifty and a hundred on debut. It was a wonderful start, yet not many believed the left-hander had it in him to progress too far since he was seen as nothing more than a nudge and push player. However, conquering all critics, Cook has compiled a career that is definitely heading towards greatness. His latest marathon against India is only proof of his growing stature. A man who has scored three Test tons in his first three Tests as skipper has to be something special. 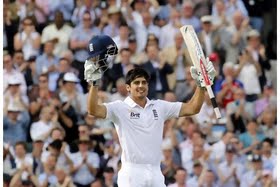 Cook’s Test figures tell an amazing story in itself. Since making his debut a little over six years back, Cook has featured in 84 Tests, including the ongoing one at Motera, Ahmedabad. He has already amassed 6764 runs (and counting) at a wonderful average of 49.01. Importantly, he has already notched up as many as 21 hundreds, which equates to a ton every four Tests. As mentioned earlier, three of those have come in his last three Tests, since taking over as English skipper. The great things about Cook’s career don’t end there. Out of 21 hundreds, he has crossed 150 or more six times, proof of the fact that he is a big-innings player.

Irrespective of the result of the Motera Test, Cook’s knock will definitely raise some questions in the Indian camp, as to their competence even at home. Critically for England, it will give them the confidence that they can compete on equal terms with India in spite of conditions being in the home side’s favour. The way England batted in the first innings, there were strong beliefs that this series would go the UAE way again. Pragyan Ojha and R. Ashwin were near unplayable in the first essay. Cook has however turned things round for England.

The English captain’s knock in the second innings so far has been demonstrative of the fact that with single-minded dedication and application, any kind of adversity can be looked into with the eye. Having been cleaned up for under 200, England could have taken it easy in the second innings, knowing they were facing a mountain of a task to save the match. Cook obviously had other ideas. He came out believing that his side can compete irrespective of the situation, and his confidence has rubbed on to the rest of his teammates as well.

Unlike some great captains, Cook isn’t the kind who will mesmerise with his charisma. But, in a leadership career that has only just begun, the left-hander has demonstrated time and again what the phrase leading from the front means. He has scored runs in most parts of the world, played big knocks under extremely tough situations, and, above all, has been a tough nut to crack. If Cook continues in the manner he has been piling up runs in recent times, he will undoubtedly end up as one of the greats of modern times.