It was an embarrassing defeat for Kolkata Knight Riders as they were bundled out for just 105 chasing a tall target of 171. Batting first, Mumbai Indians got off to a steady start although Dwayne Smith was too slow. Luckily for the hosts, Tendulkar was firing at the other end. The opening stand was halted by a brief interruption caused by flood light failures. After the resumption of play, Tendulkar got out, bowled round his legs trying to paddle Rajat Bhatia. The veteran batsman brought up his tournament best of 48 from 28 balls with 8 fours in an opening stand of 93 in 13 overs. 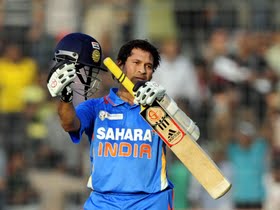 Dwayne Smith got out dragging a slog sweep to long on off Iqbal Abdulla after a 53-ball 47. Mumbai Indians struggled a bit after that losing key wickets but Dinesh Karthik with a good cameo of 34* from 18 balls lifted Mumbai Indians to 170 for 6.

KKR got off to a terrible start in their run chase with Gautam Gambhir bowled for a duck by Johnson. The other opener Bisla fell to Ojha, stumped out after missing a big hit to leave his side at 38 for 2 in 6.1 overs. Mumbai Indians got total control of the match by removing the trio of Yusuf Pathan, Kallis and Morgan in succession to slip to a disastrous position of 77 for 5 by the 13th over.

The visitors were bowled out in 18.2 overs with Harbhajan Singh doing well for his 3 for 27. Mitchell Johnson and Pragyan Ojha chipped in with a couple of wickets. Sachin Tendulkar got the Man of the Match for his 48.

Toss and Teams: Hosts Mumbai Indians have won the toss and elected to bat first against the Kolkata Knight Riders at the Wankhede Stadium in Mumbai. For KKR, Ryan McLaren comes in for Senanayake.