Marnus Labuschagne disappointed to throw it away after hundred

Prolific Australian batsman Marnus Labuschagne has said that he is disappointed he couldn’t carry on to make a bigger score having crossed three figures on the opening day of the fourth Test against India at The Gabba on Friday. Labuschagne made a fine 108 from 204 balls but perished to T. Natarajan, trying to take on the debutant. Still, thanks mainly to Labuschagne’s efforts, Australia ended Day 1 in the ascendancy at 274 for 5.

Speaking after the day’s play, Labuschagne admonished himself on his dismissal and said, "You know you don't need to be playing at anything around 4th stump line or even 3 and a half stumps. I tell myself to be cool, when you get to a hundred just carry on. It's about how that moment is, I don't plan my hundred celebration. A little bit disappointed that I got out.”

Despite Labuschagne’s dismissal, the Aussies recovered well courtesy an unbeaten stand of 61 between skipper Tim Paine (38 not out) and Cameron Green (28 not out) for the sixth wicket. "For Tim and Green to play like that against the new ball was good. Maybe we have a slight edge but they hung in there throughout," Labuschagne added, while also praising the Indian bowlers. 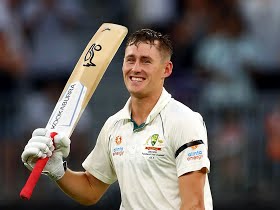 Natarajan was the most impressive of the Indian bowlers, finishing with 2 for 63. Apart from sending back Labuschagne, he also dismissed the well-set Matthew Wade for 45. Sundar chipped in with the big wicket of Steven Smith for 36 while Siraj and Thakur dismissed openers David Warner and Marcus Harris respectively.

India had a horror day in the field with skipper Ajinkya Rahane and Cheteshwar Pujara dropping Labuschagne. Thakur also put down a simple return catch towards the end of the day’s play as Australia finished on top.