Although the Rajkot Test ended in a draw, there was some drama towards the end of the match, and India had to dig deep to come out unscathed

Although the Rajkot Test ended in a draw, there was some drama towards the end of the match, and India had to dig deep to come out unscathed. Here are some interesting observations from the Test.

Do England hold a psychological edge over India? Irrespective of the venue, India have found it hard to get the better of England. The visitors went into the match very low on confidence, having been embarrassed by Bangladesh in Bangladesh. Yet, when they came up against the Indians at Rajkot, they were a completely different team. Alastair Cook once again enjoyed himself, getting yet another hundred, while Joe Root, Ben Stokes and Moeen Ali also got tons. Even the bowlers outshone India to an extent. One wonders if England indeed have the wood on India.

Are Indian spinners overdependent on conditions? Harbhajan Singh stoked a controversy a while back by claiming that the pitches in India are too much in favour of the Indian spinners. He was vindicated to an extent as the trio of Ravichandran Ashwin, Amit Mishra and to some extent Ravindra Jadeja struggled to make an impact. Against New Zealand, Virat Kohli won all tosses, and allowed his bowlers to make best use of the conditions. That wasn't the case at Rajkot, and the Indian tweakers struggled. England's success was a clear illustration of the fact that when conditions are not in their favour, Indian spinners are playable even at home.

Has Gautam Gambhir lost his golden chance? The Rajkot Test was a big match for the southpaw in terms of his Test career. The 35-year-old got his opportunity because Lokesh Rahul was injured and Shikhar Dhawan remains out of contention owing to form and fitness issues. As such, Gambhir had a golden opportunity to grab his chance. He went into the match having scored a brisk fifty in the final Test against New Zealand. But, with disappointing scores of 29 and 0, he hasn't done his future much good. 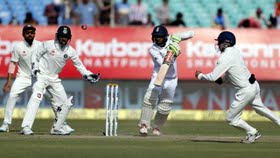 Should Ravichandran Ashwin bat at number six? Ashwin may have struggled with the ball, but he continued to impress with the bat. The man who has a few Test hundreds to his name, albeit all against West Indies, made a crucial 70 in the first innings, and played a significant hand in the second innings as well when India were looking to bat out time. If Ashwin can bat at number six, it will guarantee India playing five bowlers in every Test. Of course, that would mean leaving out Rohit Sharma or some other genuine batsman. But, if it works for the team, why not try it?

Have England found a genuine Test opener? It has been a while since England have been struggling to find a suitable partner for Cook. They have tried numerous options. Jonathan Trott couldn't rescue his career at that position; Michael Carberry and Nick Compton failed miserably. With no option left, England even drafted in limited overs specialist Alex Hales. He had mixed success, but did not inspire confidence as a Test opener. Haseeb Hameed is only one match old, but has raised hopes of being the man England have been searching for a long time with a clinical performance. The Englishmen will now hope that he can build on the great start.