What now for India after the embarrassing defeats at Mumbai and Kolkata?

This is not the way it should be going. This was to have been the series to avenge the humiliation of the 4-0 drubbing that the hosts suffered in England last summer. India, it was believed, had the opportunity to do to England what they had done to them, and Dhoni and his charges were chomping at the bit to get after them in conditions that would be hostile to the visitors.

This is not the way it should be going. This was to have been the series to avenge the humiliation of the 4-0 drubbing that the hosts suffered in England last summer. India, it was believed, had the opportunity to do to England what they had done to them, and Dhoni and his charges were chomping at the bit to get after them in conditions that would be hostile to the visitors.

And the trap was well laid too: England would be denied spin of any consequence in the tour games and then pounced on in the tests by two or three spinners on viciously turning tracks. This is the kind of thing that India were forced to deal with when they travelled overseas and they were determined to return the favour. Listen to what Virat Kohli had to say back in late October in justifying the strategy: 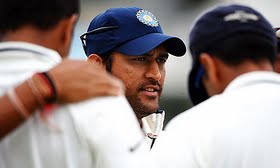 We were given the flattest of tracks in practice matches in England and Australia, and then suddenly presented with a green top during the tests. During practice matches we would face those 120 kmph bowlers…if they wanted to be fair to us, they could have provided us with same kind of tracks for practice matches, like what we used in tests. Especially, when they know visiting teams get very less time to practice. Now they would be playing on turning tracks and definitely know where they stand.

There was nothing underhanded here. This was an eye for an eye; this was justice. So what went so badly wrong?

To a certain degree you could say the scheme worked. At least it did in the first test, because England seemed to have been unprepared for what they encountered when they were easily cast aside for 191 in reply to the 521 scored by the hosts in the first innings -- a position from which they were not able to recover despite making over 400 in the second innings. Unwisely, they chose to leave out Monty Panesar, who was to prove a major trump card in the second and third tests. And manfully though Graeme Swann tried, he was not able to exert enough pressure on his own at Ahmedabad.

Paired together in the following two games they did to India what India were supposed to have done to England, capturing 27 wickets cheaply. Importantly, in the third test, on a better batting surface, the English pacers also came to the party, bowling with pace and skillfully harnessing whatever swing was available to snatch ten wickets. The Indian fast bowlers, on the other hand, could only manage two wickets between them.

Both teams now travel to the Vidharba Cricket Association Stadium in Jamtha, Nagpur for the fourth test starting on December 13. So what happens now?

The selectors have taken some action, removing Yuvraj Singh, Zaheer Khan and Harbajhan Singh from the squad, and replacing them with in-form batsman, Ravindra Jadeja, young pacer ParwinderAwana, and leg spinner PiyushChawla. They will be hoping that these changes will facilitate an improved performance at Nagpur and beyond from a team that has been outplayed in every aspect of the game.

But they will need much more than that. It may be okay for your opponent to out-bowl and out-bat you – if they’re better they’re just better. It is inexcusable, however, that the gulf in fielding between the two teams should be so wide, and it indicates a deeper underlying problem – one that hard work should rectify. In addition, there is an intensity that the visitors have shown that has been lacking in the Indian team. Lackadaisical running, for instance, in both innings at Kalkota, resulted in the loss of two very important wickets.

There was also heavy criticism of the way the Captain assigned fielding positions. It was the view of many, for example, that usual short-leg fielder, Chetshwar Pujara, might have been able to catch Alastair Cook on 17, had he not been encumbered by pads that prevented him from going low enough quickly enough to his right. The England captain went on to make 190, and the game could have turned out very differently had that catch been accepted.

Going into the game at Nagpur, India might think they have nowhere to turn. They tried the raging turner in Mumbai and it backfired; they also lost when presented with a much better batting surface at Kolkata. But all is not lost. Despair has no place in high-level sport.

India has to approach the fourth test with renewed focus, knowing that they have players who have performed and overrun visiting opponents in the past and can do so again. Batsmen like Sehwag, Gambhir, Tendulkar and Kohli have to show a kind of resoluteness at the crease that has been mostly absent this series. And Ishant, Ashwin and Ojha, and their colleagues in the field, have to be more demanding of the English batsmen. Victory is never guaranteed but India needs to send the signal that they are serious about fighting their way back.