Dravid: India has a great chance of winning in South Africa

"I think we have a great chance this time looking at the depth of the current side," Dravid was quoted as telling PTI according to a NDTV report.

"We have got some quality quicks, we have the opportunity of playing the all-rounder if we need to. We have got quality spinners in Jadeja and Ashwin. What also excites me is that all our batsmen have been to South Africa before and they have the experience of 40-50 Tests," he added. 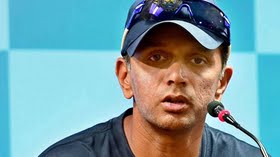 "Having said that, you do need a bit of luck in those conditions, bit of rub of the green. If we get that, I am very confident about our chances," Dravid further said.

Speaking on the issue of scheduling Dravid admitted that there’s load on players. “Some years are tough for the team and some are not. There is a lot of pressure on players but that is same for all teams. But it will be nice if we can balance the schedule though it is not an easy job," he explained.