knock to power India with a first innings lead of 135 runs with still two wickets in hand.

Skipper MS Dhoni played the knock of his life, an unbeaten maiden double century to put India in the driver’s seat of the opening Test at Chennai. MS Dhoni deflated the Aussies with his daredevil knock to power India with a first innings lead of 135 runs with still two wickets in hand. Dhoni remained unconquered on 206 (from 243 balls with 22 fours and 5 sixes). Along with debutant Bhuvneshwar Kumar, who is on 16* (from 56 balls), Dhoni took the India total from 406 for 8 to 515 for 8!

India had an early blow in the final session when R Ashwin dragged a cover drive off Lyon onto his stumps. Harbhajan Singh squandered India’s advantage by getting bowled by Henriques after attempting an ugly heave. India slipped to 406 for 8, a lead of just 26 runs before Bhuvneshwar Kumar joined Dhoni. India plundered as many as 144 runs in 36 overs against a tired Australian attack. 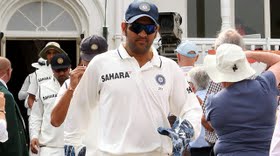 Update at Tea: India have moved into a strong position of 371 for 6 in 105 overs by Tea on Day 3 with just another nine runs to knock off before going into the lead. A sensational knock from Skipper MS Dhoni who has raced away to 97* has turned the match on its head. Virat Kohli scored his 4th Test century in the afternoon session before throwing his wicket away in an attempted big shot off Lyon.

Kohli settled with a score of 107 (from 206 balls with 15 fours and a six) while putting up 128 runs with Dhoni for the 5th wicket. Dhoni went hammer and tongs against the second new ball which hardly swung or moved around. Ravindra Jadeja failed to get going yet again in this format of the game. This time he scored only 10 before leaving a short of length delivery from Pattinson which pegged back his off stump. Despite, the loss of two key wickets, it still was a fruitful post lunch session for India with 108 runs coming in 26 overs thanks to Dhoni’s counter punch.

Update at Lunch: India battled it out to go to Lunch feeling safe at 263 for 4 with 117 more runs needed to clear the first innings deficit. Virat Kohli continues to look solid having moved forward to 83* (from 173 balls with 10 fours and a six). The arrival of Skipper MS Dhoni (37* from 42 balls with 4 fours) has pepped up the scoring rate for India after a dullish start in the morning.

Sachin Tendulkar was the only man to be dismissed in the 27 overs bowled in the morning session in which India added 81 runs to its overnight total of 182 for 3. Of all the bowlers, Tendulkar got out to Nathan Lyon although it was a good delivery that spun in sharply from the footmark outside off to take an inside edge and crash onto the stumps through the bat pad gate. Tendulkar (81 from 159 balls with 7 fours) was defeated in an attempted cover drive after being deceived in the flight by the off spinner. The Aussies needed 53 minutes to get their breakthrough on Day 3 to end a promising stand of 91 runs for the 4th wicket.

Skipper MS Dhoni prevented the Aussies from making further inroads with his crucial partnership of 67 with Kohli for the unbroken 5th wicket.

Build Up to Day 3: All eyes will be on Sachin Tendulkar as he is just 29 runs short of an elusive 52nd Test century. The first Test is nicely poised as India will be to begin with look to get closed to Australia’s 380 and then try and squeeze out a handy lead. With 198 more runs required to match Australia’s total, it would not be an easy task for the Indians against a quality Aussie attack led by the destructive James Pattinson. This third day’s play could well decide the fate of this Test match.