India win their first international after close to three months in this Australian summer. But it is a big one. Against Pakistan. A win against a big team that ensures them against any unlikely slip in the league stages

Virat Kohli scored an imperious century to help India open their World Cup campaign with a 76-run victory over arch-rivals Pakistan in a Pool A match at the Adelaide Oval, on Sunday.

India were once again cooler and calmer than the old rivals. Dhawan set the tone really with a patient return to form. Hardly looked like a bloke who has been struggling all summer. Kohli pkayed the big innings, Raina provided the impetus, and despite a blip in the end you knew India had enough. Shehzad and Haris Sohail threatened India briefly, but they played too many dots. They didn't bat like modern limited-overs batsmen do. Shami's good work was followed up by Ashwin, who bowled three maidens, and began Pakistan's slide with Sohail's wicket. It was all over when Shehzad fell on 48. Misbah's 76 was, alas and predictably, an effort in vain, and one that took shape after all had been lost. Will Pakistan have to wait four more years before having a go at India in a World Cup or will the two meet again in the knockouts? We will see about that later. 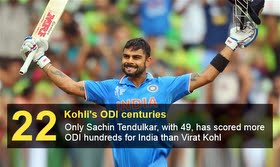 MS Dhoni: It was a very good performance, I was very happy with our batting. When you are batting first, it is not easy over here. It doesn't come on that nicely. It has a bit of a variable pace initially. Gets comfortable after that. It was important we stayed in the middle. The big partnership between Virat and Shikhar. And then Raina capitalised as well. The break in between was important. the World Cup itself can get you going. Also the fans. Even before we came here, there were a lot of fans in our lobby.

The fan question for Dhoni is: "How do you control your emotion when you sense a big win?" The answer is: "I don't control my emotions. They are there. Just that I don't like to be over-expressive."

Misbah-ul-Haq: They played really well, posted a big total, and bowled really well. We lost our way with three wickets in the middle. The pitch was really good, and with the quality of their batting, 300 was a pretty good effort. If all the batsmen had batted well, it could have been achieved. Two-three batsmen never got in, and got out in the first couple of balls. You can't say much about that. Now we have to just look forward. You can't just think of this game. We have to focus on the next one.

Virat Kohli: Man of the Match of the game. Probably one of the biggest in my career so far, Amazing way to begin our World Cup. Big game against Pakistan, amazing fight from them.