Did Ganguly call Sehwag foolish over his coach comments?

Former India opener Virender Sehwag on Friday has said that he has fooled into applying for the coach’s job post, and that some members of BCCI coaxed him. He had also alleged that he did not have a ‘setting’ in BCCI.

"Look I couldn't become the coach because I didn't have any setting with those who were in power of appointing the coach)," Sehwag had told Hindi news channel 'India TV'. 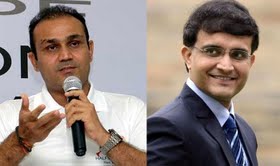 According to some media reports, former India captain Sourav Ganguly has termed Virender Sehwag foolish for speaking in this manner. "I've got nothing to say. Sehwag spoke foolishly" Ganguly was quoted as saying.

However, Ganguly later took to Twitter and has denied that he had said anything of that sort.

The Cricket Association of Bengal President meanwhile is looking forward to the Eden Gardens ODI between India and Australia on September 21.

"All complimentary tickets of 25,000 is gone. We have also sold about 15,000 tickets out of the available 30,000. We still have five days left," Ganguly was quoted as saying in an NDTV report.