In their second practice match of the tour, India ended day one of the match against WICB President's XI at 93 for 3 after having bowled out the opposition for 180. Spin did most of the damage on the day as Ravichandran Ashwin and Ravindra Jadeja

In their second practice match of the tour, India ended day one of the match against WICB President's XI at 93 for 3 after having bowled out the opposition for 180. Spin did most of the damage on the day as Ravichandran Ashwin and Ravindra Jadeja claimed three wickets each while Amit Mishra, who picked up four scalps in the previous game, added a couple more. When it was their turn to bat, India lost openers Shikhar Dhawan for 9 and Murali Vijay for 23. Cheteshwar Pujara was the third wicket to fall for 28. Lokesh Rahul continued his impressive form, remaining unbeaten on 30.

Having been asked to bowl first, India struck in the eighth over when opposition skipper Leon Johnson was dismissed by Shardul Thakur for 3. He was caught by Stuart Binny. The other opener, John Campbell, battled his way to 34 before Ashwin had him stumped. Once India made the early inroads, they did not allow the opposition to fight back, keeping them on the mat. Shai Hope became Binny's victim, falling for 11. Jermaine Blackwood, who has been impressive for West Indies in his brief Test career, was looking for having reached 36 before he was undone by Jadeja.

The introduction of spin steadily accelerated the batting side's decline. Vishaul Singh and Montcin Hodge, both were sent back cheaply by Jadeja. Mishra and Ashwin them combined to dismantle the tail without much effort. If at all, WICB President's XI managed to reach a score of somewhat respectability, it was due to the efforts of Rahkeem Cornwall, who kept the Indians at bay with a solid knock of 41. But, it wasn't enough to take them close to 200. 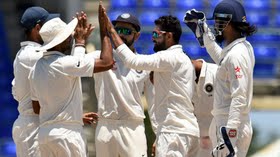 While India would have been pleased with their bowling, they should be disappointed with their batting effort on the day. Dhawan managed only 9 before being taken out by Jason Dawes. Vijay got a start, and did not carry on. After the early setbacks, India seemed to be recovering courtesy Pujara and Rahul, but the former fell just before end of day's play. It will now be up to Rahul, and the middle-order comprising, Virat Kohli and Ajinkya Rahane, to put India in a comfortable position in the match.