Team India have arrived in West Indies as favourites to win the four-Test series. As such, the visitors would be extremely disappointed if they do not put up an impressive performance. Having said that West Indies

Team India have arrived in West Indies as favourites to win the four-Test series. As such, the visitors would be extremely disappointed if they do not put up an impressive performance. Having said that West Indies, even though they went down to Australia recently, would be no pushovers. As such, India will have to be in sync with their game to outdo the Caribbean team. What definitely goes against India as they head into the West Indies Tests is the fact that they haven't played a lot of white-ball cricket in recent times. Following the Sri Lanka victory, it has all been about the shorter formats, including the World T20 in India followed by the IPL.

The biggest challenge of all for the Indians on tour will be the performance of their batsmen. Although, on paper, they seem to have a settled line-up, that actually isn't the case in reality. From the opening slot to the middle order, there are issues that India need to sort out. First and foremost is the opening quandary. Shikhar Dhawan and Murali Vijay undoubtedly will be the first choice openers. But, Dhawan has struggled of late in Test cricket while he has continued to shine in the shorter versions. On the other hand, Lokesh Rahul has performed whenever given opportunities. As such, the think thank would find it difficult to leave out Rahul without giving it a serious thought, especially considering his recent form.

Things do not end there. In Sri Lanka, with two of the regular openers not available, Cheteshwar Pujara was asked to don the responsibility, and responded with a match-winning hundred. Before that knock, Pujara was finding it very difficult to break into the playing eleven, considering his previous struggles. But, now India would be pondering where to use him. He hasn't really lived up to the expectations at number three. So should India aim for him as an opener? That will be a quandary for sure as Rahul, Vijay and Dhawan's hats are already in the ring. And, of them, Vijay is all but a certainty to open. Sometimes injuries actually make selection easier!

The inclusion of Pujara comes with another catch. Wherever he bats, the fact is that, if he is chosen, India will have to leave out Rohit Sharma, since the other batting slots are already occupied. Rohit was backed to do well at number three, but he had a torrid time, and India's plans went for a toss. India will have to take a call on what they do with him soon. He has been around international cricket for a decade now, and yet has failed to establish himself in Test cricket after a heroic start. The good part is that Rohit will be facing the opponents against whom he made a memorable debut, and will want to work on the feel good factor. 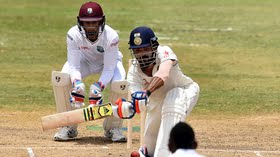 Although India have a reasonably strong batting line up, it is one that has been tested in tough conditions, and has faltered. Apart from Virat Kohli and Ajinkya Rahane, and to an extent, Vijay, no one has managed to overcome the overseas challenges. And, even Kohli had a miserable tour of England. As such, these prolific Indian batsmen will have to be wary of faltering again. Of course, West Indies will not be as great a challenge as England, Australia, South Africa or New Zealand. Still, the Indian batsmen should be desperate to do well, to prove that they can compete in all conditions. That, above all, will be their greatest challenge.