Sri Lanka-Pakistan Series Review: The men who made the difference

Sri Lanka won their first Test series since 2009, and also their first since the retirement of the legendary Muttiah Muralitharan following the much expected draw at Pallekele, with rain playing spoilsport again.

Sri Lanka won their first Test series since 2009, and also their first since the retirement of the legendary Muttiah Muralitharan following the much expected draw at Pallekele, with rain playing spoilsport again. With the last two Tests being drawn, the victory at Galle it was that stood as the difference between Pakistan and Sri Lanka. Still, there were a few amazing performances throughout the series that enabled the home team to break the jinx of not winning a Test series since the retirement of Murali. Here’s a look. 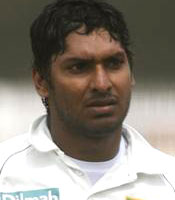 Kumar Sangakkara: This was Sangakkara’s series from start to end. He began by scoring a hard-fought, unbeaten 199 at Galle. A scoreboard error denied him a much-deserved win. However, he did well enough to lead his team to victory in the opening Test, which, in hindsight, was the defining performance of the series. Sangakkara’s knock led Lanka to 472 at Galle, and the bowlers easily rolled Pakistan over in the absence of their skipper Misbah-ul-Haq. The left-hander’s innings was critical since it set the tone of the series for Lanka. Pakistan were always on the back foot after Sangakkara’s marathon effort. He continued his good work during the rest of the series as well.

Tillakaratne Dilshan: The Lankan opener may have pulled out of the third Test to be with his kids, who were unwell. However, in the two games that he featured in, he made a significant difference. Dilshan it was who gave company to Sangakkara in the crucial partnership at Galle. His attacking knock acted as the perfect foil to Sangakkara, as the two former skippers flayed the insipid Pakistan attack. Dilshan made a critical, quick-fire half-century in the second innings as well at Galle, which gave the Lankan bowlers more than enough time to bowl out Pakistan in the second innings.

Rangana Herath: It was only fair that the left-arm spinner played a major part in Lanka’s first Test series win since Murali hung up his boots. In Murali’s absence, Herath has credibly taken over the reins of being the team’s premier spinner. Although nowhere as talented as the retired off-spinner, Herath has been a success if international standards are taken into consideration. It was he who bowled the side to a historic win at Durban earlier this season. At Galle as well, he picked up key wickets, which led to Pakistan’s embarrassing collapse. He was ably supported by the other spinner Surav Randiv as well. In the games to follow as well, Herath continued to pick up important wickets, as a result of which Pakistan were always under pressure.

Thisara Perera: The all-rounder was drafted into the team for the final Test, and made an instant impact. Perera’s four-for in the first innings at Pallekele featured batsmen from the opponents’ top five. Then, when Lanka were in a spot of bother, while replying to Pakistan’s total, the lower-order batsman came up with a flourishing 75, which comprised three sixes, at a strike rate of 87.

Pakistan were forever playing catch-up, which cost them.