India's batting coach Sanjay Bangar has come out in support of the oft-criticised Rohit Sharma, stating that people must take a look at his numbers

India's batting coach Sanjay Bangar has come out in support of the oft-criticised Rohit Sharma, stating that people must take a look at his numbers, and compare with those of some other prominent players at the same stage, before taking a dig at the Mumbai Indians captain. According to Bangar, Rohit has been singled out unfairly, and he extended his support by stating that Rohit has 'definitely contributed to the team's cause'. Pointing out to Rohit's figures, Bangar commented that he has two hundreds and four fifties in 14 Tests at an average of nearly 38. While the numbers are not bad, they don't tell the entire story.

Stats can often be misleading, as is the case with Rohit. His average is a poor 38, despite the fact that he scored big hundreds in his first two matches. Also, while Bangar points out that Rohit has four fifties to his credit, those have come over a span of 12 matches, which basically means he has scored one fifty every three Tests. Acceptable? Definitely in ODIs, but not the five-day game. Of course, it cannot be assumed that Rohit batted twice in each of these matches. To be fair to him, we break down his numbers innings-wise. In 25 visits to the crease, he has crossed 50 on six occasions. This still translates to a high failure percentage -- 19 innings. 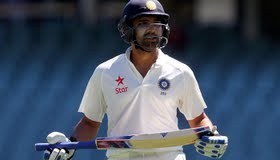 Had Rohit been constantly batting at number six or seven, one could understand his lack of big scores. But that clearly hasn't been the case. On the contrary, he has batted up the order at number three a few times. And, even in the lower order, he has got enough opportunities to play himself, as he has been batting at number five. Thus, the theory that Rohit has to constantly bat with the tail, something which was very true in the case of VVS Laxman, doesn't hold ground here. He has been getting his chances to make his mark, but has clearly failed to do so.

The backing that Rohit finds with the team management is definitely helping his cause, but it cannot deviate from the fair criticism of Rohit, particularly in the wake of some abysmal dismissals he has featured in. In the first innings at Galle, he embarrassingly played down the wrong line against Rangana Herath, getting the basics of playing spin wrong. In the second Test, he lost a great opportunity to stamp his authority with a hundred, when he lost concentration, and was trapped lbw in the last over of a day's play. At the SSC, he again eased to fifty before hooking one straight into the fielder before lunch.

The abovementioned dismissals make it clear that Rohit has definite concentration issues. Fifties and sixties aid the team for sure, but don't win you Test matches. And, it must also be noted that although Rohit has played only 14 Tests, he has actually been around the international scene since 2007. And if still one feels that Rohit has played too few Tests, it would be pertinent to note that another former Mumbai player Vinod Kambli played only 17 Tests despite averaging 54. Rohit will possibly be competing for a spot in the playing eleven with Cheteshwar Pujara. And, in the wake of the latter's magnificent comeback, he should be given no favour.