The Man of the Match Virat Kohli: "It was a challenging wicket, that's what you want as a cricketer, new challenges to play. Last game I was very disappointed to have got out, that really hurt ... even the 49 against Pakistan in Dhaka was really satisfying, that's what you need, a tough pitch a good bowling attack and you pulling your team out of trouble ... Yuvraj weathered the storm and then smacked a few, Yuvi style ... I think these performances are good for him as well, he's in good nick."

India's Ravichandran Ashwin says his country's clash with Pakistan is a bigger rivalry than the Ashes. India and Pakistan match more than a game for fans. 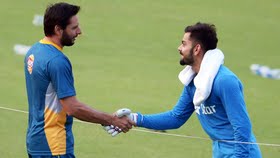 India vs Pakistan clash at a World tournament, and it will come with the inevitable trappings. Big names will be present among the massive numbers in attendance. Sachin Tendulkar will be there. So will Imran Khan, Sunil Gavaskar, Wasim Akram, Kapil Dev and Inzamam-ul-Haq.

India have played Pakistan 10 times in the 50-over World Cup and the World T20, and have won nine matches. The Durban T20 in 2007 was tied, after which India prevailed in the bowl-out.