Australia narrowly defeated Sri Lanka by 15 runs to win the Commonwealth Bank Series. The third final at the Adelaide Oval was in the balance right till the end with the pendulum shifting towards both the sides. Eventually the luck was with Australia with Clint McKay taking a five-wicket haul to bowl them to a title win. Sri Lanka chasing a modest target of 232 had their top order collapsing but a cool knock from Upul Tharanga seemed to have kept them in the contest.

It was a flying start provided by the pair of Mahela Jayawardene and Tillakaratne Dilshan as they set off to chase the modest target of 232. Their start was cut short to 3 overs as Dilshan (8) got caught off a leading edge while trying to flick a rising delivery from Brett Lee. Next man in Sangakkara kept the momentum going in with Jayawardene. But in the 7th over, Lee struck again when Sangakkara (19) slashed him into the hands of slip. 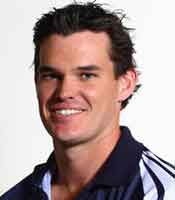 Clint McKay complemented Lee’s efforts with a double strike as Australia firmly came back in the match reducing Sri Lanka to 53 for 4 inside the first powerplay. McKay’s first victim was Denesh Chandimal (5) with a late inswinger which hit the pad after defeating a flick shot. In the 10th over, Sri Lanka’s hopes dashed off as Skipper Mahela Jayawardene (15) got bowled through the gate trying to casually flick a late inswinger off McKay.

Australia having got back into the game were defied by a neat partnership between Lahiru Thirimanne and Upul Tharanga which took the visitors past three figures. In the 27th over, Thirimanne (30 from 57 balls with a four) departed playing an uppish square drive off Watson to point. Australia had to work hard for their next breakthrough as well which came in the 36th over when Clint McKay bent his back to get a delivery to nip away just enough to force Chamara Kapugedera (7) to nick him behind to the diving Mathew Wade.

The hosts were in total control with Sri Lanka at 142 for 6. Their next wicket came in the form of the dangerous Nuwan Kulasekara (15) who miscued a lofted shot off Lee to mid on. Sri Lanka remained to be in the contest with Upul Tharanga joined by all-rounder Farveez Maharoof and the pair took Sri Lanka within striking distance. However, the match once again opened up when the Australian Captain Shane Watson got a delivery to seam away while luring a well set Upul Tharanga (71 from 122 balls with 3 fours and a six) into a false drive to have him caught behind. Sri Lanka at this stage were 204 for 8 with 28 more runs to win from 24 balls.

Clint McKay took the remaining two wickets that of the no.10 and no.11 to bowl Australia to a sensational 16-run win while Farveez Maharoof was left stranded on an unbeaten 18. Sri Lanka got bowled out for 215 in 48.5 overs with Clint McKay claiming 5 for 28 in 9.5 overs which got him the Man of the Match award. Shane Watson with 7-1-13-2 and Daniel Christian with 8-1-21-0 did a great job as well for the hosts. Tillakaratne Dilshan got the Man of the Series award for his all-round efforts.

Sri Lanka Innings : Sri Lanka need a modest target of 232 to chase to win the third final at the Adelaide Oval to clinch the Commonwealth Bank Series. A fabulous bowling and fielding performance from the Lankans put the hosts under tremendous pressure although they missed out on an opportunity to bowl out the Australia for a much lesser total.

Although Australia started off slowly with Tillakaratne Dilshan opening the bowling, the momentum picked up as David Warner started to take the inititiative. Along with an unwell Matthew Wade, Warner provided a cracking start for the hosts. In the 14th over, Sri Lanka got a much needed first breakthrough to end the 75-run opening stand. David Warner (48 from 45 balls with a four and a six) got out nicking a backfoot drive off Farveez Maharoof to the diving Sangakkara.

The match changed dramatically since the 21st over when the Australian Skipper Shane Watson (19 from 18 balls with a four and a six) was brilliantly caught by a forward diving Rangana Herath when the former was pulling a long hop from Dilshan to deep mid wicket. The hosts went onto lose three more wickets after this to find themselves under huge pressure at 135 for 5! First there was a run out in the 2ndd over when Michael Hussey (1) had a mix up with Wade while the latter had dabbed a delivery towards Dilshan at backward point and stuttered in the running.

Rangana Herath who took a great catch took a wicket off the very first ball he bowled when he got the well set Mathew Wade (49 from 74 balls with 3 fours) top edging a square cut to the Keeper. In the 27th over, Peter Forrest (3) got bowled by a Herath arm ball when he was trying to play an inside out drive. Sri Lanka picked up two more wickets in the next 10 overs to have the Aussies at 177 for 7. David Hussey (19) was given out lbw when he was struck on the backfoot by a Maharoof delivery that jagged back. It was a wrong decision according to the Hawk Eye with the ball sailing over the top of the stumps. Next to go was Daniel Christian who charged down the track to Maharoof but only to spoon his slower leg cutter into the hands of mid off.

Sri Lanka then were defied by a useful 40-run stand between Clint McKay (28 from 32 balls with 3 fours and a six) and Brett Lee (32 from 54 balls with 2 fours) which took the Aussies to a respectable total in the end. The Australians were bowled out for 231 in 49.3 overs. Farveez Maharoof and Rangana Herath were the pick of the bowlers taking three wickets each.

Toss and Teams : The CB Series will end today with Australia yet again batting first! This time it is despite their opponents Sri Lanka winning the toss in this third and decisive final at the Adelaide Oval but choosing to do what they have done well so far - that is to chase runs!

Australia have come into this match with Skipper Michael Clarke and fast bowler James Pattinson out with injuries. Their places have been taken by Peter Forrest and off spinner Nathan Lyon, who will be making his ODI Debut. Sri Lanka have retained the same XI so Angelo Mathews isn’t playing because of his injury.

The second final played at this ground saw Australia work hard to reach a total of 270+ on what seemed to be a slow pitch. However, Sri Lanka chased down the runs easily. Today as well we could see a pitch which will be more in the favour of the batsmen.