Despite having played 77 Tests in which he has scored close to 6,000 runs at an average of over 48, India’s reliable number three batsman Cheteshwar Pujara has come under the scanner of

Despite having played 77 Tests in which he has scored close to 6,000 runs at an average of over 48, India’s reliable number three batsman Cheteshwar Pujara has come under the scanner of late for his slow scoring. Pujara does not have a hundred to his name since the historic triumph Down Under in 2018-19. He had a tough time in the two Tests in New Zealand as well, where his lack of intent came into question.

Even in the final of the Ranji Trophy, Pujara took a painstaking 237 balls for his 66, playing for Saurashtra against Bengal. Overall, he has a strike rate of 46.18 in Tests. However, Pujara has defended his slow scoring stating it is okay to take some time in Test matches. 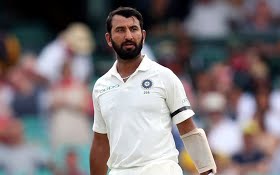 “I don’t think there is too much talk (on the inside). In media, it is described differently but the team management has been backing me on this completely. There is no pressure from the captain, coach, or anyone else,” Pujara was quoted as saying in a PTI report.

Responding to the debate over his slow scoring in the Ranji Trophy final, Pujara said all he is looking to do is win matches for the team, and that the strike rate debate doesn’t bother him. “The question that was asked on social media (during Ranji final) was, ‘why am I taking so long to score X number of runs’? Whether I pay attention to that, no, I don’t. My job is to make sure that the team wins at all times,” the 32-year-old said.

“People have this tendency to pinpoint one person, but it is just not about me. If you look at any Test series where I have scored runs and taken a little bit of time, the opposition batsmen, most of them, have consumed the same number of balls,” the man with 18 Test hundreds to his name further added.

In conclusion, Pujara went to the extent of stating that he is no David Warner or Virender Sehwag and that his job is to score big runs. “I know I can’t be a David Warner or Virender Sehwag but if a normal batsman takes time there is nothing wrong in that. People expect big knocks from me. I always challenge myself to score a 100 but to average close to 50 in Tests means you are scoring a half-century almost every second innings,” Pujara pointed out.