In the previous contest against KKR, SRH were let down with the bat managing only 142 for four, forcing their skipper David Warner to come up with some harsh words. Manish Pandey and the promoted Wriddhiman Saha occupied plenty of the time at the crease, but couldn’t open up.

The opening pair of Warner and Jonny Bairstow, who were legendary last year, haven’t quite got going so far. New Zealand captain Kane Williamson is waiting in the wings. However, bringing him in would mean dropping high-quality all-rounder Mohammad Nabi from the team. Spinner Rashid Khan also needs to lift his game as he hasn’t been his threatening self. 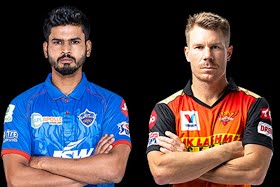 In contrast, Delhi have won two in two on the basis of their superior all-round strength. Kagiso Rabada has given nothing away in the two matches, and has been consistently among the wickets. In the last game, Anrich Nortje impressed with his pace. The spin duo of Axar Patel and Amit Mishra have ensured Ravichandran Ashwin isn’t being missed.

In the batting, if Marcus Stoinis starred in the opening game with 53 off 21 balls, Prithvi Shaw stood up with a fluent half-century against CSK. Shikhar Dhawan, skipper Shreyas Iyer and Shimron Hetmyer are yet to deliver fireworks.

Head to Head Record: Sunrisers Hyderabad have a good record against Delhi Capitals, having won 9 and lost 6 out of 15. However, this DC is a different outfit.

The pitch at Abu Dhabi has been a decent one for batting. Spinners do come into play. 160-170 should be a par score.

Weather will be sunny with maximum temperature of 37 degree Celsius. Humidity will be over 50 per cent.