AB de Villiers tore apart the KKR bowling lineup with 6 sixes and 5 fours in his knock of 73 and Chahal, Sundar kept things tight with the ball as RCB dominated the game. With five wins out of seven, Bangalore are now tied with the top two sides Mumbai and Delhi, and are only separated by net run rate.

RCB openers Aaron Finch and Devdutt Padikkal got them off to a flier as Kohli elected to bat first. KKR bowlers weren’t getting much out of the pitch and failed to break the opening stand on a batting friendly Sharjah pitch. Andre Russell dismissed Padikkal, who was just starting to look dangerous. “Mystery” spinner Varun Chakravarthy was troubling Finch and that kept the run rate in check.

Prasidh Krishna came back in the 13th over to disturb Finch’s furniture, and with the score at 99-2, the famed duo of AB-Kohli was then present at the crease. Both of them were taking their time as KKR bowlers were quickly running through their overs. ABD, who was at 8 off 9 balls at one point, would go on to finish his innings with 73 off 33! 86 runs came off the last five overs as Mr. 360 went berserk. He slammed 18 off Nagarkoti, 17 off Cummins, and 16 off Russell in three consecutive overs as KKR bowlers were looking clueless. Kohli hit just one boundary in his knock of 33 as RCB finished with a mammoth score of 194. 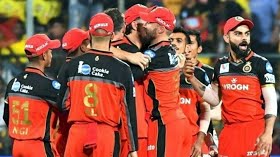 KKR’s response with the bat was sedate as RCB’s pacers were bowling with a lot of steam. Only 16 came in the first three and Navdeep Saini castled Banton in the next over. Shubhman Gill tried to take on Siraj and slammed him for a couple of boundaries as KKR sniffed a chance given the fact that their ultra aggressive batsmen were yet to come.

Yuzi Chahal and Washington Sundar spun a web around the KKR’s batting as they gave nothing away and also picked up wickets. Sundar picked up Rana and Morgan to finish with figures of 4-0-2-20. Chahal went through the gates of skipper DK to finish with astounding figures of 4-0-12-1. In between, KKR’s only batsman who was middling the ball, Shubhman Gill, was run out courtesy some smart work in the field by Udana and keeper AB. Russell did give some slight hopes of a turnaround with 14 off Udana’s 3 balls, but the Lankan left armer had the last laugh as Russell skied one to be taken by Siraj easily. After that, it was just a matter of time before KKR folded, with Morris helping himself with a couple of wickets as KKR fell 82 short of the target.