A man who played 81 Tests, has scored over 5000 runs and averaged nearly 49 with 14 hundreds is bound to be remembered as one of the better players to have represented the country. It hasn’t quite been the case with Thilan Samaraweera...

A man who played 81 Tests, has scored over 5000 runs and averaged nearly 49 with 14 hundreds is bound to be remembered as one of the better players to have represented the country. It hasn’t quite been the case with Thilan Samaraweera, the man against whose name the abovementioned impressive figures stand. Samaraweera quit the game as he entered it, silently but not without making a significant contribution. Like the country’s former pacer Chaminda Vaas, Samaraweera also has had to retire hurt, after being dropped. At their peak, both played under the shadows of more talented and flamboyant cricketers. At the same time, their impact on the game must be remembered with due respect. 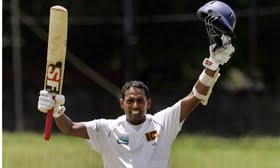 During his stint with the Lankan Test side, Samaraweera wasn’t the most impactful player, but right from the time he made his debut in 2001, he did a steady job for the Lankans in the lower middle-order. Samaraweera was lucky to have guys like Sanath Jayasuriya, Mahela Jayawardene, Kumar Sangakkara and, in the last few years, Tillakaratne Dilshan batting ahead of him in the order. And while those men walked away with the spotlight, Samaraweera ensured that he was around to aid the side more often than not – sometimes compiling big stands with above-mentioned names and at other times rescuing the side from tricky situations, and keeping the innings afloat in the company of the lower order.

The one reason why Samaraweera failed to make it to the league of exceptional batsmen was because of his moderate record away from home. He averaged under 20 in Australia, 27 in England and even in India his record was an abysmal 24. At the same time, Samaraweera did make a major impact in South Africa during the tour in 2011-2012. As a result of the wonderful showing, which included two tons, Samaraweera ended with an average a magnificent 68 in South Africa, something which even his more illustrious mates cannot boast of. He had an excellent record in New Zealand and West Indies as well, 60 and 50 respectively, which proves that he was not a complete bunny away from home.

The problem with Sri Lankan cricket is that they do not play too much cricketaway from home, which is why they are unbelievably brilliant at home and equally hapless abroad. Like many other Lankans, Samaraweera’s career also suffered due to the same as he got tagged as a ‘home’ specialist when the simple fact was that Lanka were playing too many games at home. In spite of it, Samaraweera managed to keep a steady head, and built a career worth lauding.

Even with all his on-field achievements, Samaraweera will be most remembered as the innocent face of the Lankan team, who was in the main line of attack when terrorists opened fire at the team bus in Lahore. Samaraweera got hit by a bullet, but he was strong-willed enough to overcome the frightening experience, and continued compiling a respectable career. Samaraweera won’t go down in the annals of Sri Lankan cricket as one of their greatest, but when the question of cricketers who were committed to the team’s cause arises, he should be right up there.