Keeping it simple, the secret of Bumrah's success

Jasprit Bumrah, who starred with the ball in India's impressive win over South Africa, stated that he is only sticking to the basics. Thanks to his wonderful bowling performanc

Jasprit Bumrah, who starred with the ball in India's impressive win over South Africa, stated that he is only sticking to the basics. Thanks to his wonderful bowling performance, India entered the semi-final of the Champions Trophy.

Speaking about his bowling, Bumrah told ICC, "It's my first visit to England, and the wickets have been different to what I expected.

"But it's been a good challenge for me, a good challenge to contain batsmen. To bowl in tough conditions gives you a lot of confidence. It's been a different experience for me. Usually in England the ball swings, but over here the wickets are very hard and good to bat on. So we're very happy that it was a good bowling effort for us." 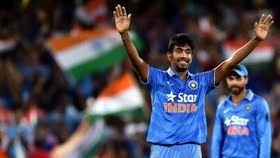 On bowling at the death, he added, "It's always good if the captain has so much faith in you and shows so much confidence in you. That always feels good.”

Bumrah's tournament economy rate of 4.47 is highly impressive. "The basic plan was that since the ball was not swinging too much, we were just trying to bowl good, hard lengths," he revealed. "We were trying to contain the batsmen. That was our basic plan,” he explained.

"It made an impact because everybody chipped in and everyone was containing batsmen. They wanted to hit, but couldn't," he added.