First-ever Day-Night Test in India: All that you must know

India is set to host their maiden Day-Night Test match, at Eden Gardens in Kolkata from Friday. This will be the first pink-ball encounter for both India

India is set to host their maiden Day-Night Test match, at Eden Gardens in Kolkata from Friday. This will be the first pink-ball encounter for both India and Bangladesh.

India is currently 1-0 up in the series having won the Indore Test by an innings and 130 runs, and are favorites to clinch the two-match series 2-0 at Eden Gardens. India will become the ninth Test-playing nation to feature in a Day-Night Test. They had refused to play a pink-ball Test during the tour of Australia in 2018. Pink-ball encounter for both India and Bangladesh.’ Have a look at the best online pokies australia for a chance to win as India will be favourites here against Bangladesh.

The India-Bangladesh Test will be the 12th Day-Night game in the longer format of the sport, which began with the maiden pink-ball Test between Australia and New Zealand at Adelaide in 2015.

Here are some key facts to know about India’s maiden pink-ball Test match.

The Day-Night Eden Gardens Test will be played from 1 pm to 8 pm to counter the dew factor in Kolkata.

The pink SG ball will also make its debut in the day-night Test. In all the previous 11 Day-Night Tests, Kookaburra and Dukes pink balls were used. 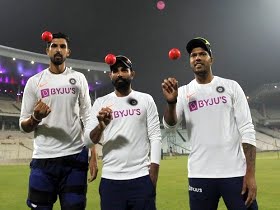 Two of India’s most famous cricketers Kapil Dev and Sunil Gavaskar will be present to witness the grand occasion.

Sania Mirza, PV Sindhu, Abhinav Bindra, and Mary Kom are the other famous sports-persons who will be present.

The Cricket Association of Bengal (CAB) will felicitate members of the first-ever Test between Bangladesh and India that was played in 2000.

Army paratroopers will fly into the Eden Gardens to hand over a pink ball to skippers Virat Kohli and Mominul Haque before the toss.

Pink and Tinku are the official mascots of the day/night Test.

BCCI President Sourav Ganguly has confirmed that tickets for the first four days of the Test in India are sold out.