England have gone onto capture the NatWest Series at Chester-le-Street 3-0 with one more match to come. Needing only 201 to win, England was lucky to get improved batting conditions as the overcast conditions disappeared and the sun came out to ease things for the batsmen.

England have gone onto capture the NatWest Series at Chester-le-Street 3-0 with one more match to come. Needing only 201 to win, England was lucky to get improved batting conditions as the overcast conditions disappeared and the sun came out to ease things for the batsmen.

A solid opening stand of 70 in 16.3 overs from Skipper Alastair Cook (29 from 46 balls) and Ian Bell (69 from 94 balls with 9 fours) saw the shine of the new balls to put England in a good position to chase the target. The Aussies had their problems with Shane Watson and Brett Lee not able to do much with the ball because of picking up niggles on the field. Lee bowled 2.2 overs before leaving mid-over after pulling up a strain.

Cook was the first to depart when he played an uppish drive off Clint McKay to spoon a catch to short covers. Bell added 66 runs with Trott for the 2nd wicket before he chopped one onto his stumps off Clint McKay, who finished a good spell of 10-1-29-2.

Jonathan Trott with 64* (from 102 balls with 4 fours) and Ravi Bopara with 33* (from 47 balls with 3 fours) dragged the game till the 48th over but ensured a smooth victory for England by 8 wickets.

Steven Finn got the Man of the Match award for his wonderful seam bowling in the first half. 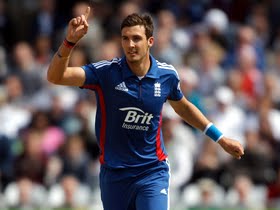 Australia restricted to 200 for 9: A superb bowling show from the tall and young Steven Finn helped England in keeping Australia down to 200 for 9 in the Fourth ODI at Chester-le-Street. Finn took 4 for 37 while all the other pace options used by Alastair Cook sustained the pressure on the visitors.

Asked to bat first under overcast conditions, Australia found life extremely tough against the moving new balls. Steven Finn provided England with a double blow in the 6th over when he dismissed David Warner (2 from 19 balls) and Peter Forrest in consecutive deliveries by striking their pads infront of the stumps. Australia from 6 for 2 at this stage were crawling against some top class bowling from England.

A steady stand between Shane Watson and Skipper Michael Clarke was slowly bringing the Aussie innings in shape. However, Tim Bresnan ended that partnership when Shane Watson (28 from 54 balls with 2 fours and a six) chopped him onto the stumps. Australia went onto lose their fourth wicket in no time after Watson’s exit with a score of 68 for 4 in the 22nd over. This time the wicket taker was Ravi Bopara, who hit the top of the off stump of George Bailey (9) with a beauty.

Skipper Michael Clarke battled it out in the middle and despite surviving two dropped catches and one close lbw shout couldn’t capitalize to come up with a big score. In the 33rd over, Clarke (43 from 85 balls) was dismissed when Steven Finn forced an inside edge onto the stumps with a speedy full ball. In the next ball, Matthew Wade was brilliantly caught behind by a diving Craig Kieswetter for a duck which left Finn on a hat-trick for a second time in the match. Finn couldn’t clinch the hat-trick but his blows left Australia at 96 for 6 in 32.3 overs.

A heroic knock from David Hussey (70 from 73 balls with 9 fours) helped Australia reach a modest total of 200 for 9. Steven Finn finished with superb figures of 10-3-34-2 while Anderson and Bresnan took two wickets each.

Toss and Teams: Australia have been asked to bat first after losing the toss in what is their must win match in the 4th ODI at Chester-le-Street. England have made two changes with Samit Patel and James Anderson replacing Graeme Swann and Jade Dernbach. For Australia, Ben Hilfenhaus and James Pattinson come in for Mitchell Johnson and Xavier Doherty.