Maverick former India batsman Sandeep Patil chaired his last meeting as chairman of selectors on Monday. Here are some interesting observations he made during his last press conference while holding the post.

Maverick former India batsman Sandeep Patil chaired his last meeting as chairman of selectors on Monday. Here are some interesting observations he made during his last press conference while holding the post.

On whether Sachin Tendulkar was forced to retire: There are some matters between the selectors and BCCI which should remain confidential and cannot be revealed. I am only answerable to BCCI.

Summing up his tenure: We have taken some bold and tough decisions looking at the future of Indian cricket. We are very happy at the end of our term that the team is doing well in all three formats. We also leave at a time when there is big pool of players to choose from, in all formats.

Any regrets? The only sad thing about being a selector is that you end up losing some of your friends.

Defending Rohit Sharma's repeated selection: Rohit is a fabulous player, with immense talent. He hasn't got a long run in Test cricket as he has been picked for one Test and then dropped. The selection committee, along with captain (Virat Kohli) and coach (Anil Kumble) said they will give ample opportunities to anyone who is picked. We have tremendous faith in all 15 but we are not focusing only on 15. There are others too as bench strength. 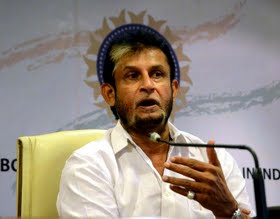 On BCCI support: A big thank you to the BCCI for providing the opportunity. The Board has taken some great decisions during my time. We are happy with the roadmap the BCCI has drawn with Rahul Dravid taking over as coach of the juniors and Anil Kumble the seniors. In our four-year term not a single BCCI official of any zone approached the selection committee for any recommendation.