India’s new batting star in Test Cricket Cheteshwar Pujara says that he loves batting at no.3 as it gives him the challenge to face the new ball. 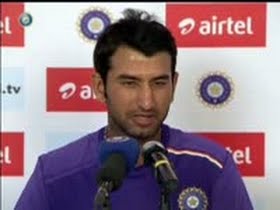 India’s new batting star in Test Cricket Cheteshwar Pujara says that he loves batting at no.3 as it gives him the challenge to face the new ball. The 24-year-old Saurashtra batsman went onto become the 19th Indian batsman to score a double century in Test Cricket. Riding on Pujara’s maiden double century, India went onto pile up 521 before the declaration and by the close of play took three English wickets.

Pujara says that the pitch has started to turn a lot and expects India to bowl out England on Day 3. He also hopes that India can wrap up this match inside five days. On his future, Pujara says that if he can continue batting in the same fashion it will be a bright one. He adds that he is not taking anything for granted and admits that he doesn’t like to get out, not even after scoring a double century.

Here is what exactly Cheteshwar Pujara had to say post play on Day 2 at Ahmedabad: