The first Test between England and New Zealand may have ended in a draw, but there was no shortage of intensity in the game over the five days in Dunedin. The hosts dominated the first half of the Test, following which England were always playing the catch up game.

The first Test between England and New Zealand may have ended in a draw, but there was no shortage of intensity in the game over the five days in Dunedin. The hosts dominated the first half of the Test, following which England were always playing the catch up game. In spite of being on the back foot though the visitors batted exceedingly well on the last two days and deservedly saved the Test. Thanks to their dedicated efforts on day four and five, England would now go into the second Test on an even keel with the hosts.

There were some exceptional performances by England in their second innings, but none more impressive than the one from nightwatchman Steven Finn. Even though Alastair Cook and Nick Compton came up with fighting centuries, it was Finn who ensured there were no hiccups for England on the final day. The tall guy known more for his accurate bowling scored 56 runs, but more importantly occupied the crease for 286 minutes and 203 balls. By the time he was dismissed, in the 153rd over of the innings, England were well in their safe zone. 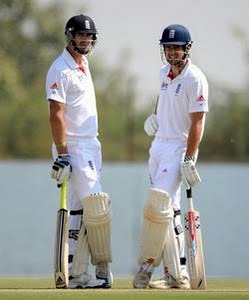 While Finn was brilliant, it was an overall dogged performance by England that was instrumental in their saving the game. Both the openers, Cook and Compton, batted with a great degree of application, which was missing in England’s first innings display. The figures say it all – Cook batted for 335 minutes and 252 balls for his 116 while Compton occupied the crease for 416 minutes and 310 balls en route to his maiden Test hundred, one that he will remember for the rest of his life. Jonathan Trott also came up with a crucial half-century in the context of the game while Ian Bell and Matt Prior saw to it that there was no lower order collapse.

On one hand, New Zealand would have been disappointed at not being able to close the game. At the same time, they would be pleased by their overall performances. A number of individuals shone in the game, which would give them confidence going into the next Test. Neil Wagner and Bruce Martin bowled wonderfully well on the first day of the Test, as a result of which England were cleaned up for a paltry score. With the bat, opener Hamish Rutherford was sensational. His 171 put New Zealand in the driver’s seat, and the team’s cause was aided by well-compiled half-centuries from Peter Fulton and skipper Brendon McCullum. If anything, they would like the other batsmen in the side to carry on after getting starts.

With the game ending in a draw, both teams would go into the next Test equally high on confidence. Although England dominated the last two days, there is still scope for improvement in their batting and bowling departments. As for the hosts, they would want to be more consistent with the ball in the second Test at Wellington.