Needing 176 from 20 overs, Pakistan were given a dream start from Imran Nazir, who smashed the Bangladeshi bowler with utmost disdain. Imran Nazir scroed 72 in just 36 balls with 8 fours and 3 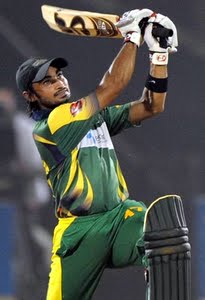 sixes before he got out in the 14th over with Pakistan sitting pretty at 124 for 1. Skipper Mohammad Hafeez helped himself to 45 from 47 balls before being the second and final casualty of the run chase which was all over in the 19th over.

Bangladesh Innings: Bangladesh have given themselves every chance of beating Pakistan by putting up a healthy total of 175 for 6 in 20 overs. But to gain an entry into the Super Eights at the cost of Pakistan, Bangladesh will have to win the match by atleast 37 runs. On the other hand, Pakistan need to score just 140 to join New Zealand in the Super Eights from this Group D.

Tamim Iqbal provided the early impetus for the Tigers with a cameo of 24 from 12 balls with 5 fours. Shakib Al Hasan took over from him to take Bangladesh to the good total with his sparkling 84 from 54 balls which was filled with 11 fours and 2 sixes. For Pakistan, Shahid Afridi finished off his 4 overs going for just the 20 runs.

Toss and Teams: Bangladesh have won the toss and elected to bat first in their Group D Match against Pakistan at Pallekele. It’s a must win game for Bangladesh and they need to do so by some margin to have an outside chance of making it to the Super Eights ahead of Pakistan.

The Tigers have made one change with pacer Abul Hasan coming in for left arm spinner Elias Sunny. Pakistan have stuck with the same XI that defeated the Kiwis.