The Delhi Capitals outplayed the Royal Challengers Bangalore with both bat and ball as they regained the numero uno position in the points table after briefly losing it to MI yesterday. Shaw and Stoinis played quickfire knocks and Rabada picked up four wickets as DC defeated RCB by 59 runs.

DC batsmen Shaw and Dhawan came to open for Delhi after Kohli won the toss and chose to field. Shaw continued from where he had left in the last game as he slammed three fours in the first over off the left armer Udana. Washington Sundar was bowling from the other end and bowled tight lines as runs flowed from the other end. Chahal came in to bowl as early as the fifth over, but went for 18 as Dhawan and Shaw were unrelenting. Shaw raced to 44 at the end of the powerplay, with his team at 63-0. 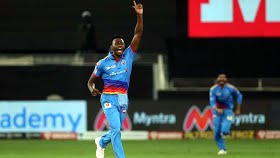 Siraj came to bowl the 7th over and hurried Shaw with a bouncer as he gloved one to AB. As they say, one brings another as Dhawan holed out to Udana soon after. Moeen Ali came to bowl the 12th over, and skipper Shreyas couldn’t resist the temptation to dismiss the ball out of the ground, but lost his wicket in the process as Padikkal did a du Plessis at deep mid wicket. The six overs after powerplay yielded only 31 runs but at the cost of 3 wickets. Marcus Stoinis came to partner Pant at the crease and started to go for the big hits straightaway. He struck a couple of boundaries off Moeen, before he and Pant decided to target Navdeep Saini, as the express RCB pacer went for 48 off his 3 overs.Stoinis got himself a 24 ball 50 as DC finished at a compelling 196-4.

Even though RCB were chasing a mammoth score, they would have fancied themselves as their top 4 was in form, and also the fact that 179 was chased with zero fuss the day before by CSK on the same pitch. Their start however, wasn’t good as Padikkal got out to Ashwin in the 3rd over. Aaron Finch, who was dropped twice inside the first two overs, couldn’t ride on his luck as he nicked one behind off Axar. AB joined the skipper Kohli and began well by hitting two fours. He however, got a bit too greedy as he skied one to Dhawan in the sixth over, and the Indian opener accepted the important catch.

RCB were in deep water at 43-3 after 6 overs, and all the remaining hopes were resting with their skipper. Kohli tried to simply rotate the strike, as he had to be there at the end. He however, put a lot of pressure on himself as the required rate exceeded 13 runs per over at the halfway stage. Moeen got caught off Axar as the left arm spinner finished with impressive figures of 4-0-18-2. Kohli now was forced to go for the boundaries, and he edged one off Rabada, thus effectively ending the chase. Dube and Sundar tried to slog a few out of the park, but the job was too big to be done as RCB finished at 137-9. Nortje helped himself to two wickets while his Protea partner Rabada picked four.