Yusuf Pathan justified his place in the KKR team and also his reputation by smashing the fastest fifty of this IPL in just 15 balls at the Eden Gadens in Kolkata.

Yusuf Pathan justified his place in the KKR team and also his reputation by smashing the fastest fifty of this IPL in just 15 balls at the Eden Gadens in Kolkata. Pathan scored a mind blowing 72 from 22 balls with 5 fours and 7 sixes to help KKR chase down Sunrisers Hyderabad’s target of 161 in just 14.2 overs!

Kolkata Knight Riders with this crushing win finished on par with the Chennai Super Kings as far as the points are concerned. But with a superior run rate booked the no.2 spot behind Kings XI Punjab. This victory also means that KKR will have a maximum of two matches to reach the Final of IPL 7. 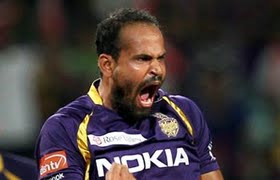 Dale Steyn, one of the world’s best bowlers was at the receiving end of the onslaught from Yusuf Pathan with his over going for 26 runs containing two sixes , three fours and a couple. Yusuf Pathan’s fifty in 15 balls became the fastest ever half century in IPL history. The previous record was held by Adam Gilchrist which came in 17 balls.

Asked to bat first, Sunrisers Hyderabad had a mixed innings to end up with 160 for 7. Quite a few batsmen got starts but couldn’t convert them into bigger scores. Sunil Narine was as usual outstanding bowling out his four overs for just 19 runs.

KKR got off to a flier with Skipper Gautam Gambhir scoring 28 from 18 balls while Robin Uthappa scored 41 from 30 balls. Despite Karan Sharma’s 4 for 38, there was no stopping for KKR thanks to Yusuf Pathan’s carnage.