In the preview to the series, the South Africans had candidly admitted that off-spinner Ravichandran Ashwin would be their biggest threat.

In the preview to the series, the South Africans had candidly admitted that off-spinner Ravichandran Ashwin would be their biggest threat. And, the bowler made the prophecy come true on the second day of the Mohali Test, as India hit back on a surface tailor-made for the spinners. Ashwin, who had claimed one scalp late on the opening day, grabbed four more to complete 150 Test wickets. Ravindra Jadeja and Amit Mishra divided the other five as India gained a spender 17-run lead. The batsmen then extended the advantage, courtesy Cheteshwar Pujara's half-century to finish the day with a handy lead of 142. 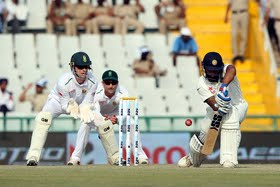 India's second innings began as inauspiciously as their first. In fact, it was nothing short of an action replay as Shikhar Dhawan poked away from the body, again off Vernon Philander to grab a pair, on the same venue where he made a smashing 187 on Test debut. Once more just like in the first innings, Pujara and Murali Vijay rebuilt. They batted slowly but assuredly, not taking too many risks. But, while Pujara gave it away after getting a start last time, on this occasion, it was Vijay's turn. Just as India were turning the screws, he was claimed by the guile of Imran Tahir for 47. Pujara though carried on, and took India to a somewhat safe position.

Earlier in the day, the Indian spin trio combined perfectly, and ended up claiming all 10 wickets to fall in the innings. They ought to have, considering the pitch offered to them. While the day ended on a bright note for India, the beginning was not all that auspicious. Overnight batsmen Dean Elgar and Hashim Amla batted with commendable composure to nearly frustrate the Indian bowlers into submission. Even the spinners could not make an impact despite the pitch offering appreciable turn. Their partnership of 76 had given South Africa the significant edge, but the Indian bowlers woke up soon enough.

Amla was out in unusual fashion, beaten in the flight by Ashwin, and stumped as the ball caught Wriddhiman Saha's chest and went back on to the stumps. Elgar, who had showed excellent technique again spin until then, played one sweep too many, and looped an easy catch to Jadeja at point. Dane Vilas also fell to the same shot just before lunch, caught by the same fielder off the same bowler. After having begun the day on a confident note, the Proteas went to lunch under immense pressure, having crumbled, and having lost half their side.

As has often been the case with South Africa's batting when the rest have struggled, AB de Villiers again took on the bowlers. It was little surprise that he looked in no trouble even on a minefield of a pitch. He found the boundary on as many as six occasions, often creating his own angles, and was primarily responsible for cutting down India's lead to negligible proportions. Mishra has a habit of bowling that one unplayable delivery, and thankfully for India, this time he scalped de Villiers with one such gem. The tail was easy meat for the Indian spinners. They are ahead after day two, but the job is only half done.