SL vs WI 2nd Test: After the entire day four at the P. Sara Oval was washed out, Sri Lanka completed the victory formalities against a hapless West Indies without much trouble on day five.

After the entire day four at the P. Sara Oval was washed out, Sri Lanka completed the victory formalities against a hapless West Indies without much trouble on day five. The win, on expected lines, was engineered by the slow bowlers -- with Rangana Herath scalping four victims and Milinda Siriwardana claiming three. West Indies, who resumed the day at 20 for 1, were skittled out 171, tasting defeat by 72 runs to crumble to a 0-2 series loss. Darren Bravo top-scored for West Indies with 61, but as has been the trend with the visitors, the rest just crumbled. 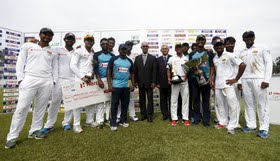 It was Siriwardana who began the collapse of the Windies batting. Not for the first time in the series, he got a wicket in his first over, this time having Shai Hope stumped for 35. Siriwardana dealt another big blow to West Indies as he dismissed the talented Jermaine Blackwood a little before lunch. At the other end, Dilruwan Perera ensured that there was no return to form for the struggling Marlon Samuels. The batsman gently poked at the off-spinner, and all he managed was to nick one, which was taken sharply by Angelo Mathews at slip. A review for the catch did not save Samuels, who added to his growing list of single-figure scores in Tests.

It was then the turn of Herath to get into action. In the fourth over after lunch, he sent back Denesh Ramdin, and the well-set Bravo. Jomel Warrican came in and slammed the ball around. The last West Indian pair at the crease had some fun as they added 33 for the last wicket. But, it was one-way traffic all the way, as Lanka got home with ease.

The day had begun on a much brighter note for West Indies as Hope and Bravo added 60 valuable runs during their partnership. Hope displayed impressive footwork, driving Dhammika Prasad, and even managed to find the ropes when Herath was brought on. Bravo was jittery early on, playing and missing a lot. But, he survived the early woes, and came up with some crisp drives. He even took on Perera successfully, hitting him into the sightscreen. For a brief while, West Indies demonstrated resistance, but once the alliance was broken, it all fell apart for the hosts.