Former West Indies captain Darren Sammy, who called out Sunrisers Hyderabad for alleged racist behaviour, has stressed on the importance of educating young cricketers on anti-racism in a systematic manner so that the sanctity of the gentleman's game can remain in tact.

Speaking at ICC’s online series Interviews Inside Out, Sammy stated that teaching young kids is a must so that they are aware of the diversity in the sports at an appropriate stage.“There is a need for education at a systematic level. Just as there is an emphasis on education around anti-doping or anti-corruption, the same emphasis must be given to educating the youth on anti-racism in order to help young cricketers understand diversity in cricket and adapt early on,” Sammy, the only captain in world cricket with two T20 World Cup trophies to his name, said. 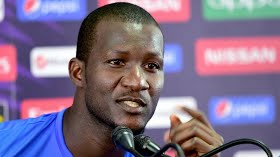 Sammy has been at the forefront of the demand of rooting out racism in cricket. He has sought an apology from his former IPL teammates at Sunrisers Hyderabad on learning that they used an allegedly derogatory term to refer to him.

“Leaders in our cricket community, whether it is a captain, senior player, a coach or an administrator, we have an enormous responsibility as an educator along many different platforms. One of those platforms I think that has been neglected and not given the attention that is required and that is the understanding of the different levels of racism that exists within the game,” Moody, who is now a renowned coach, added.

“If there is anything positive that has come out of this, is that it is highlighting that we need to be a lot more understanding of how we can make this better as individuals,” the two-time World Cup winner further explained.

Guha gave the example of the current English men’s team, and made her point as to how diversity can co-exist in the sport. “We have a real opportunity with cricket because it does cross different races, backgrounds, and religions, and does bring all of these different people together. It is really a sport that unites everyone. I mean, look at the current England (Men’s) team, we stumbled upon this team that is so diverse,” she explained.

Racism has been the topic of many debates across the world after the death of African-American George Floyd at the hands of a white police officer in USA came to light.