Mumbai Indians collected their second win of IPL 7 in seven matches as they defeated a formidable Royal Challengers Bangalore in a home match at the Wankhede Stadium.

Mumbai Indians collected their second win of IPL 7 in seven matches as they defeated a formidable Royal Challengers Bangalore in a home match at the Wankhede Stadium. It was a high scoring contest with Mumbai Indians posting 187 for 5 and RCB threatening to chase it but eventually going down by 19 runs.

Mumbai Indians worked extremely hard to achieve their victory as they had slipped to 84 for 4 by the 10th over. CM Gautam gave the early impetus scoring 30 from 28 balls. A crucial partnership of 98 between Skipper Rohit Sharma (59* from 35 balls) and Kieron Pollard (43 from 31 balls with 6 fours) rescued the homeside. 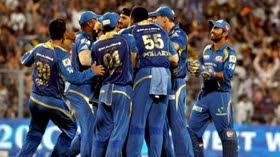 There was a high-tension moment during the Mumbai Indians’ innings when an angry Kieron Pollard almost threw his bat towards Mitchell Starc. The bowler ran in towards the crease to deliver when Pollard pulled out and the former released the ball targeted towards the batsman.

RCB bowlers had a terribly off day conceding as many as 25 extras. In the run chase, RCB was on top with a flying start of 53 for 1 in 5.1 overs. Chris Gayle was going great guns before he was bowled by Harbhajan in a sweep for a 24-ball 38. AB de Villiers was bowled cheaply trying out a predetermined sweep off medium pacer Jasprit Bumrah.

Skipper Virat Kohli scored a fighting 35 from 28 balls before he was caught at long off. RCB simply didn’t have any chance after losing its big trio and ended up with a total of 168 for 8. The Man of the Match was Rohit Sharma.

Toss and Teams: Royal Challengers Bangalore have won the toss and asked hosts Mumbai Indians to bat first at the Wankhede Stadium in Match 27 of IPL 7. RCB remain unchanged while Mumbai Indians have replaced the injured Zaheer Khan with Pawan Suyal.