Indian skipper Virat Kohli admitted that 2019 has been a fantastic year for India, but, at the same time, also rued India’s loss in the World Cup semi-final

Indian skipper Virat Kohli admitted that 2019 has been a fantastic year for India, but, at the same time, also rued India’s loss in the World Cup semi-final to New Zealand. India was among the favorites to win the World Cup. However, their batting completely fell apart in the knock-out game against Kiwis.

On the major takeaways from the year, Kohli added that the performance of fast bowlers, both at home and away, was the standout factor of the year. “Having a bunch of fast bowlers is a brilliant thing to have in Indian cricket and them taking the attention away from the spinners is a huge statement. We have it in us to win series overseas and our pacers deserve it fully. We are in the process of trying to find how people react to pressure. It's just about identifying those people and that's something we will keep striving for,” the Indian captain asserted 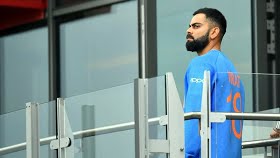 .India’s vice-captain Rohit Sharma, who was named player of the series against West Indies, was also thankful for another fantastic year. Like Kohli though, his deputy too admitted that the World Cup loss was a bitter pill to swallow. “Extremely grateful for the year I had, the World Cup win would have been nice,” Rohit said.

“The team gelled together collectively well and every individual stepped up which is a good sign. There is no way I'm stopping here and there's an exciting year coming up and I'm looking forward to it. I understand my batting really well and knowing the game plan you want to execute is very, very important. The challenge will come once we start traveling, we want to win games and want to stay on top,” he added, in praise of the team, and the challenges ahead.

Meanwhile, West Indies captain Kieron Pollard said that he is not too disappointed with the team despite the loss. Instead, he is proud of his bunch of boys.

“I don't think there is much to be disappointed actually. I'm very very proud of the guys and yes we faltered a bit with the ball and in the field, but India yet again pushed us hard and showed why there is the number one team in the world,” Pollard said.

Looking back at the positives from the tour, which saw West Indies winning one T20I and one ODI, the Windies skipper added, “Lots of exciting talent in our team and we all know what they are capable of. Hetmyer had a good couple of knocks, Pooran and his superb ball striking, Hope and his consistency and the salute guy Cottrell, I believe there is a lot to look forward in the future. For me, it's trying to contribute when it is necessary and its been a good series for both teams.”