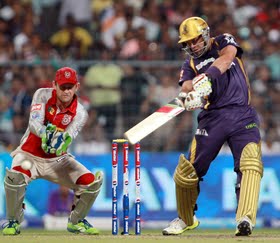 Jacques Kallis, man of the match: Frustrating not to bowl last game but the luck seems to have changed tonight. We have learnt to adapt to the game and my bowling on this track. Chasing a total on this wicket was always going to be tough, Bisla played a good innings there. We did the successive wins last season and we are looking to do the same again. Let's hope I can remain fully fit.

Adam Gilchrist: It was a good score, the pitch played well, it wasn't turning too much but was a competitive score. Couple of danger-men got out, but Bisla took control, Jacques stabilised it and Morgan played really well. Our bowlers have done a good job till tonight, the young guys are developing well including Gurkeerat and Manan.

Gautam Gambhir: I think it was a fantastic effort from our bowlers to restrict them to 149. The way Kallis, Bisla and Morgan played was good. I always think in this format you need clear thinking, cannot go into your shell and that's what happened. About Balaji, it was frustrating that he did not execute what we had planned in the meeting, and sometimes things happen in the heat of the moment. We can take a lot of positives from this game and go into the next one.

Gambhir is not happy. No, let me rephrase that, he is angry. He had a lot to say to Balaji after the first six was hit but after that last-ball maximum he had lost it. Totally. He goes into the dugout mumbling loudly at no-one in particular, needs to cool down before he gets down to his batting.

Overall, this is a pretty decent effort with the bat from Punjab. There were times it looked they could have got to 160 but then there was a time they could have gotten out for 135 too. Decent score on a slow pitch. Over to their bowlers now. Piyush Chawla has to buck up here, he's not had a good IPL so far and he's their lead spinner.

KKR will be hurting from their loss to the Lions. The match was all but sealed thanks to brain fade of KXIP batsmen and Narine’s hattrick. But the Lions came back from the bring of defeat to pull off a famous win. KKR have lost 3 matches in a row an look like a shadow of the team that won IPL 5. Gambhir is the only batsman consistently delivering. Kallis hasn’t been up to the mark, Morgan is hit and miss. And the less we say about locals like Yusuf and Manoj the better. Their bowling on the other hand has been great thanks to Senanayake and Narine and they will use the slow and spinning Eden Track to bring down the Lions.

Kolkata Knight Riders' total tally of 1019 runs this season, Gautam Gambhir's contribution has been about 30 per cent. Following the skipper's tally of 286 on his team's list of leading batsmen is Eoin Morgan, at 194 runs not quite a close second. Other big names too haven't clicked, with just a handful barely managing crossing the three-digit mark.

It's a similar tale in the KKR bowling department too. Like Gambhir, Sunil Narine (15 wickets from 7 games) too has begged for support from the other end but hasn't got any. Jacques Kallis, KKR's second highest wicket-taker, has just 7 wickets.