Punjab won their third match in a row, after beating the top three teams in the points table - Bangalore, Mumbai and now Delhi. Gayle and Pooran’s brutal cameos and some responsible batting from Maxwell meant that Punjab are still in the hunt for the playoffs race as they jumped to the 5th position in the points table.

After Iyer won the toss and elected to bat first, Dhawan got Delhi off to yet another solid start as he hit a six and a four in the very first over against Maxwell. Shaw got out in his typical fashion of going after the bowlers straightway, with the only difference being the number of balls he faced being 11 as opposed to the usual 2 or 3. But that didn’t stop Dhawan from playing his shots as he was looking in ominous touch. With three boundaries against Shami in fifth over and a great number of slop sweeps against the spinners, Dhawan was dominating the innings even as he found little support from the other end.

Iyer’s glance down the leg side found Rahul as Murugan Ashwin picked up his first. Rishabh Pant, in his comeback match, was struggling for timing and ate a lot of dots. Dhawan, who had already gotten to his fifty was going along smoothly as Rishabh Pant found Agarwal while trying to up the ante after his 20 ball 14. Stoinis came and went as Shami was bowling with a lot of fire. Dhawan was playing selfless cricket as he tried to find the boundaries even as he was nearing his hundred. He did eventually get to his second consecutive hundred, becoming the only batsman to do so but some spot on Bumrah-esque yorkers from Shami meant DC could get only 164, at least 20 short of the ideal target. 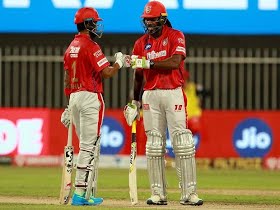 Punjab were off to a decent start as 13 runs came in the first two overs. Rahul hit a boundary on the first ball against Axar Patel in the 3rd over, but uncharacteristically threw his wicket away the very next ball. Chris Gayle took on an under pressure Tushar Deshpande as he smashed him for 25 runs in the fifth over. Punjab had raced to 50-1 at the end of five overs and the required rate had dropped to 7.6 runs per over. Then came the Ashwin over. He first bowled Gayle and then ran Agarwal out in the space of four deliveries as DC were back on top.

But we were in for another twist as Nicholas Pooran took no time to settle in and started to attack from the word go. After two boundaries against Ashwin, he smacked 24 runs in 5 deliveries against Deshpande and Stoinis. With the required rate hovering around 6, Maxwell took his time to find some form as he gently worked around for ones and twos and gave the strike to Pooran. Iyer gave the 13th over to his trump card Rabada and it paid off immediately as he got rid of Pooran. Two overs later, Rabada would come back to pick up Maxwell as well as Delhi saw an opening, albeit a small one.

The requirement then was only 17 runs from 24 balls, but a couple of tight overs from Ashwin and Axar Patel meant that the match went into the penultimate over. There was a bit of drama as Hooda was dropped by Stoinis, but Neesham put an end to all the anxiety in the KXIP camp by smashing a six over mid wicket to win his team the match by five wickets.